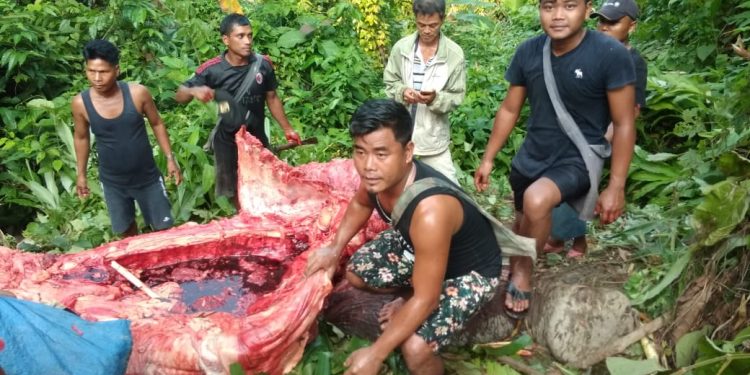 The Project Elephant Division of the Ministry of Environment and Forest has taken serious note of the incident of mysterious death of a 47 year old elephant in Mizoram.

A 47-year-old captive elephant, Laxmi, died near the Kanhmun Forest Range in Mamit district of west Mizoram. Subsequently, the body of the dead elephant was sliced, and the meat was consumed by the villagers.

The issue was brought to the notice of the Project Elephant Division by Suparna Ganguly, co-founder trustee of the Wildlife Rescue and Rehabilitation Centre, Bangalore.

On July 14, Ganguly had registered a complaint with Noyal Thomas, head of the Project Elephant Division about the incident. She said the elephant was “overworked” which led to her death.

K. Muthamizh Selvan, Scientist D of Project Elephant told Northeast Now on Saturday that they have taken cognizance of the bizarre incident, and have initiated immediate action as per the law.

The Mizoram Forest Department has been caught on the wrong foot in the case on of several issues.

Firstly, it has been found that the 47 year old elephant was transferred from Sonai in Cachar district of South Assam to the Kanhmun Forest Range in Mizoram without permission of the Assam Forest Department.

Secondly, how did the Mizoram Forest Department issue “grazing permit” on June 7 to the elephant which was illegally transferred to a timber smuggler in Mamit district?

As per Rule 12 of the Declaration of Stock Rules, captive elephants in respect of which ownership certificate has not been granted or expired could be treated as government property.

Fourthly, the Mizoram Forest Department did not have any information on the cause of death of the animal. It has been reported that the elephant died of cardiac arrest because of hard work.

Fifthly, why no post mortem examination was conducted on the dead elephant by a government veterinarian?

Sixthly, how did the field officials of the Mizoram Forest Department allow the villagers to slice the meat of the elephant and consume it?

Animal rights activists across India have accused the Mizoram Forest Department of “sleeping” over the bizarre episode.

“We are constantly in touch with the senior officials of the Mizoram Forest Department,” K. Muthamizh Selvan, Scientist D of the project Elephant Division, said.

The Project Elephant official said the case is being handled as per the law, and the Mizoram Forest Department officials are also cooperating with it.

Meanwhile, the Assam Forest Department has initiated a process to issue notice to Md. Mastufa Ahmed Laskar, the owner of the 47 year old elephant which died in Mizoram.

A case is also being registered under Section 9 and Section 40 (2A) of the Wildlife (Protection) Act, 1972.

As per Section 40 (2A), no person is allowed to sell, offer for sale or otherwise transfer or transport any animal specified in Schedule I without the permission of the Chief Wildlife Warden of the state where the animal is registered.