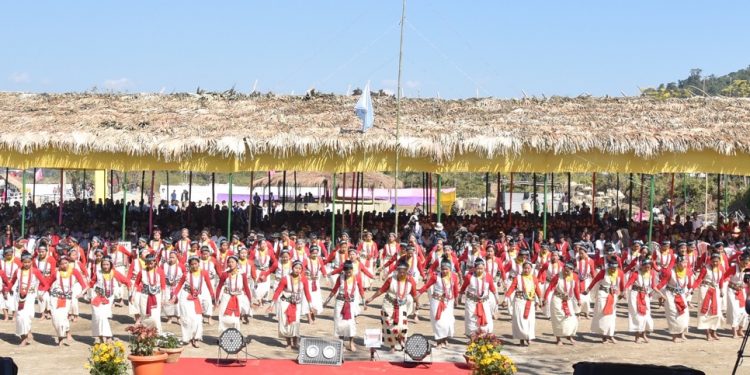 The 4th edition of Pakke Paga Hornbill Festival kicks off at the banks of Pakke River in Seijosa on Friday.

The 4th edition of Pakke Paga Hornbill Festival, a unique festival celebrating the sense of responsibility and commendable effort of the Nyishi community towards the conservation of hornbill got off to a flying start at the banks of Pakke River in Seijosa on Friday.

Seijosa which is around 137kms from here is a circle in East Kameng district.

Speaking at the inaugural function, deputy chief minister Chowna Mein said that the people of Pakke Kesang are an inspiration for others in regards to ‘conservation of nature’.

Stating that Arunachal can become the ultimate place for wildlife and cultural tourism, the DCM said with wildlife conservation, the tourism flow would also increase.

He further called upon the people to make a commitment to protect the bounties of Mother Nature and conserve the wildlife species.

“It is high time to take up the conservation issue seriously,” he assured to sanction a package for the preservation of the Wildlife Sanctuary of the State in the coming budget.

He then asked Prabhat Tyagi, the Chief Conservator of Forest for Wildlife and Biodiversity to prepare and propose innovative schemes under wildlife conservation for incorporation in next year’s budget.

RWD and Parliamentary Affairs Minister, Bamang Felix said that there has been an increase in the hornbill population in the Pakke Tiger Reserve in the last three years after the festival has begun and lauded the local community for their conservation efforts.

Discouraging hunting activities, the minister called for total abstinence from eating wild meats in order to protect the wildlife species.

While encouraging the people in their conservation efforts, he provided financial assistance for planting trees in the Pakke Tiger Reserve and also for caring of the trees after planting.

After the inaugural function, the dignitaries had a jungle safari inside the Pakke Tiger Reserve during which they spotted Wreathed and Oriental Pied Hornbills and many other rare bird species.

Pakke-Paga Festival is the only wildlife conservation-based festival of the state. The theme of the festival this year’s is ‘Celebrating Nature’.

The festival aims at highlighting the rich biodiversity of the region and also the beautiful culture and tradition of the Nyishi community.