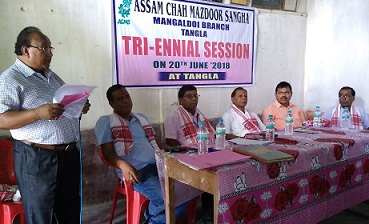 In a historic change to the committee of the largest trade union of labourers in tea gardens of Assam, Assam Chah Mazdoor Sangha (ACMS), Mangaldai branch after 34 years, Rajya Sabha MP Santiuse Kujur was elected for the post of secretary at the triennial session of the Mangaldai branch here at the Congress Bhawan in Tangla recently.

Kujur, who secured 26 votes, defeated Ganesh Parega by a margin of 7 votes. Another new face was Paban Nayak, who was elected as the president.

The session was earlier started with hoisting of organizational flag followed by budget session and election of new body.

Talking to Northeast Now, parliamentarian Santiuse Kujur expressed his gratitude to the delegates for electing him as secretary of ACMS, Mangaldai branch.

“I will try my level best to address the issues plaguing the tea workers in 23 tea gardens under the jurisdiction of the ACMS, Mangaldai branch,” Kujur said.

He said he would work at par with the principles of the Indian National Trade Union Congress (INTUC) to establish an order in the society of the tea workers for an all-round development of the Adivasi community and would encourage the growth and building of human resource which will help in eliminating socio-political-economic exploitation and inequality among the tea workers.