Nagaland: Dream project of mother-daughter duo a reality after 15 years

Toshirenla Jamir, in her 50s, and her mother Anila Jamir, 79, conceptualised the project and started working on it in 2003 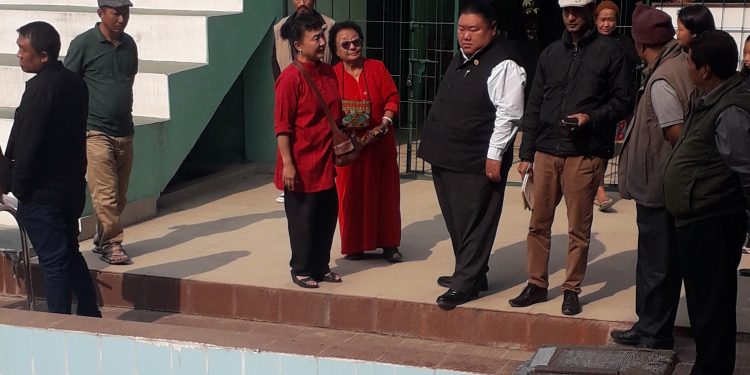 It took more than 15 years for daughter-mother duo to see their dream project, a swimming pool, for public in Nagaland become a reality.

Foundation stone of the swimming pool, built under the sponsorship of the Union Ministry of Development of North Eastern Region and Nagaland department of youth resources and sports and co-sponsored by Nagaland Youth Gymnastic Club, was laid way back in 2003 by the then Nagaland governor Shyamal Datta.

Toshirenla Jamir, in her 50s, and her mother Anila Jamir, 79, conceptualised the project and started working on it in 2003.

Since laying of the foundation stone, they have been running from pillar to post in Delhi and Kohima for funds to build the pool for the youths, sports persons and public of Nagaland.

Though almost 80 per cent of the project is complete, the rest of the infrastructure is yet to see the light of the day.

They have applied for more funds to the Central as well as the Nagaland government so that the swimming pool of 82X50 feet may be dedicated to the people soon.

Toshirenla, who is the president of Nagaland Youth Gymanstic Club, said the swimming pool will be dedicated to the people of the state at a nominal fee of Rs 250 per year per head.

First Miss Nagaland 1981 and a social worker, Toshirenla did her masters in political science and is the recipient National Youth Award 1995-96 and National Mahila Pragati Award 2002.

She is also the president of Nagaland unit of All India and South East Asia Mahatma Gandhian Workers Federation.

Nagaland minister for higher and technical education and tribal affairs minister Temjen Imna Along inaugurated the first of its kind swimming pool located in the state at Fellowship colony here on Sunday.

He lauded Toshirenla and her mother Anila for their perseverance and zeal for opening the swimming pool for the people of the state after toiling for more than 15 years.

Along said Nagaland today is in need of greater strength to build its people.

He said the Naga society comprehends too much but all ends up in dreams.

“We have become a people who want short cut to success. If the Naga people go the way they are going, I am afraid it is going to be dangerous for the society,” he said.

Urging the people to dedicate their strength for the welfare of the society, he stressed that the Nagas should be known for their hard work and Nagaland for human resources.

He added Nagaland should not be known for violent and intolerant culture and it should be in the forefront of the country as a prosperous state.