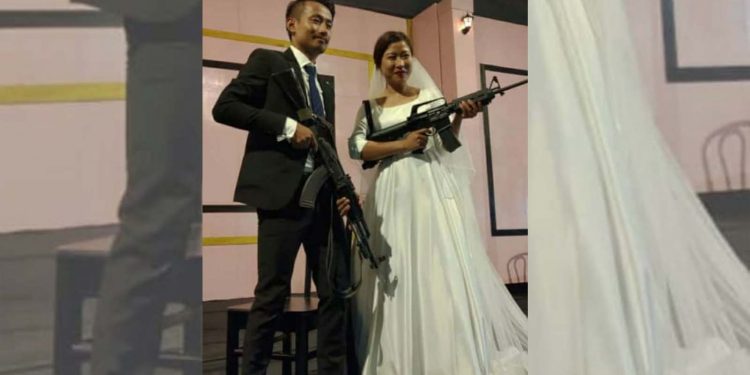 File image of son of kilo kilonser (home minister) of NSCN-U, Bohoto Kiba, and the bride during their wedding ceremony at 5th Mile in Dimapur.

Taking serious note of the photos and video that went viral on social media of a newlywed couple posing with assault rifles, Nagaland Governor R N Ravi has directed director general of police (DGP) to ‘register a criminal case, seize the guns and arrest the culprits’.

According to sources, Ravi, who is also the Centre’s interlocutor for Naga peace talks, has directed the police to initiate action against the couple and other accomplices.

According to reports, Ravi asserted that such activities were not acceptable and would not be tolerated.

“This can’t be taken lightly. This is an ugly and crude manifestation of gun culture,” he was quoted as saying.

Due to several decades of gun violence in Nagaland, unfortunately most citizens are not well versed with the laws regarding usage of guns, especially assault rifles.

There are many instances where ordinary citizens, without any harmful intentions, have uploaded their photos with guns in their social media accounts.

However, this particular picture caught the attention of many at a time when all eyes are on Nagaland as Naga political groups and the Centre have entered a decisive phase to end the decades old Naga problem.