File image of son of kilo kilonser (home minister) of NSCN-U, Bohoto Kiba, and the bride during their wedding ceremony at 5th Mile in Dimapur.

While Naga insurgents are negotiating a final peace settlement with New Delhi, public display of assault rifles during the wedding reception of the son of one of their leaders has taken the social media by a storm.

On Saturday, son of kilo kilonser (home minister) of the National Socialist Council of Nagaland-Unification (NSCN-U), Bohoto Kiba, got married at 5th Mile in Dimapur.

A photograph of the newly-wed son of NSCN-U minister and the bride seen with automatic rifles – AK 56 and M16 – during the wedding ceremony has gone viral on Nagaland WhatsApp groups.

According to sources, the invited guests were shocked at the public display of assault rifles during the reception party, somewhat reminiscent of weddings of the high and mighty in northern India.

Bohoto Kiba, a powerful Naga insurgent leader, is no stranger to controversies, especially for threatening journalists.

He reportedly threatened to shoot members of the press if they continue to use ‘self-styled’ or ‘ss’ before their designations. 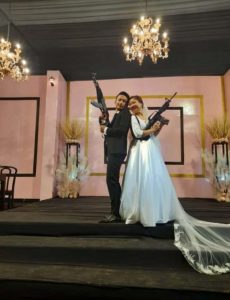 This blatant display of weapons has taken place in the rundown a final agreement likely to be signed between the Naga insurgent groups including the NSCN-IM and the Centre.

The 22-year-long peace dialogue between the NSCN-IM and the government of India concluded recently with the Centre “resolving” the contentious issues.

Before the signing of the final agreement, most of the Naga organizations and the negotiators have appealed to join hands so that peace returns permanently to Nagaland.

The NSCN-U was formed on November 23, 2007 with an inter-factional ‘truce agreement’ signed between the few cadres and leaders of the NSCN-IM and the NSCN-K at Hovishe under Niuland sub-division in Dimapur district.

The meeting was initiated and chaired by Hokiye, president of the Western Sumi Hoho, an influential body of the Sumi (Sema) tribe.

The NSCN-IM later rebuffed the agreement and said that it is not a party to the decisions arrived at the meeting.

The NSCN-U aims at unifying the two warring factions of the NSCN.

The outfit is headed by a ‘core committee’ and Azheto Choppy is its ‘convener’.