Nagaland PCC president K Therie on Sunday said neither he nor AICC general secretary in-charge of Northeast Luizinho Falerio have any knowledge about the alleged “fake letters” of Nationalist Democratic Progressive Party (NDPP).

Therie said he wanted the NDPP to file an FIR against the “fake letters” as it may bring out the truth.

He said the signatures appear to be “genuine” and added those papers were perhaps used to convince “money-minded” Naga People’s Front (NPF) members to support the ruling NDPP and BJP. He also said the social media is rife with allegations that they have accepted crores of rupees.

“Anything is possible with NDPP, they can do and also deny. They support Citizenship (Amendment) Bill at Delhi and deny it in Nagaland. He can ditch any friend any time for his love for power and money,” the PCC president said. 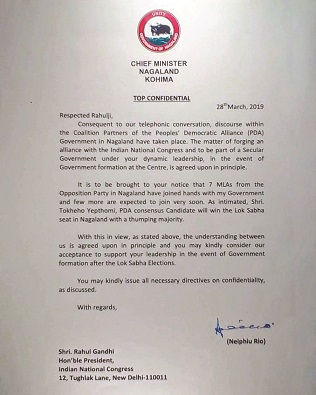 Therie said had the Congress formed the government at the Centre in 2014, Rio surely would have looked for Congress support.

He also clarified that the Congress has committed to support NPF in the formation of a secular government in Nagaland in the “present situation”. “We mean what we say,” Therie asserted. The NDPP forwarded to the media two alleged “forged letters”.

One of the letters dated March 28, 2019, purportedly signed by chief minister Neiphiu Rio and addressed to Congress president Rahul Gandhi, conveyed ruling People’s Democratic Alliance (PDA) government’s decision to forge alliance with the INC and be part of a secular government under Rahul’s dynamic leadership in the event of formation of government at the Centre by the Congress. 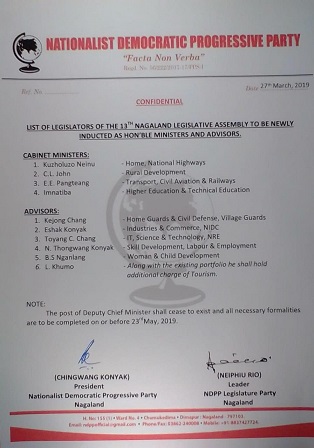 In the letter titled ‘Top Confidential’, Rio referred to an alleged telephonic conversation with Rahul for a post-poll alliance with Congress. The letter also stated that the coalition partners of the People’s Democratic Alliance have agreed in principle to forge such a post-poll alliance.

The second “fake letter” dated March 27, purportedly signed by chief minister Rio and NDPP president Chingwang Konyak, contained names of legislators from the opposition NPF, to be appointed as ministers and advisers.

The list also included two former NPP legislators as minister and advisor, who had recently merged with NDPP.

According to the letter, all formalities were to be completed on or before May 23, 2019. The letter also claimed that the post of deputy chief minister, currently held by BJP’s Y Patton, will cease to exist.

The NDPP said it would file an FIR against this forgery and added the matter will be dealt with in the most “serious manner and appropriate action will be taken as per the laws of the land”.

The contents of the “fake letters” are completely ridiculous and deserve no explanation nor any comments, said NDPP Media & Communications Committee in a release.

“They have created fake documents which are enclosed with this press release, wherein the letter heads of the chief minister and the NDPP have been forged,” the release said.

The NDPP said, “In their frustrations, due to total failure and desperation, our adversaries have once again attempted to create confusion by creating such fake news.”

The party said this latest strategy of its adversaries exposed the fact that they have completely “run out of vision and political direction and have completely failed to provide any semblance of leadership”.