The Governor's statement on Naga issue was contradictory and total misleading, says NPF. 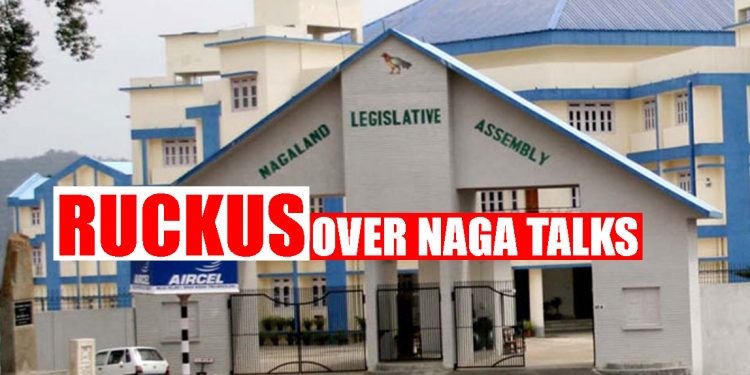 The second day of the ongoing session of the Nagaland Legislative Assembly witnesses stormy scenes over Governor RN Ravi’s remarks on the Naga political issue issue.

Nagaland’s main opposition party – Naga People’s Front (NPF) created ruckus on the Floor of the House, questioning the usage of “talks being concluded” by Governor RN Ravi during his address to the Nagaland Assembly.

NPF MLA Imkong L Imchen questioned whether the Assembly and the people of Nagaland as a whole are being ‘misled’ by Governor RN Ravi.

Governor RN Ravi in his address to the Nagaland Assembly had stated: “As you are aware the negotiations going on between Government of India and the Naga groups over the past many years have been concluded. There is now a need for efforts to build on the substantial gains made so far, and to move swiftly for the final solution.”

NPF MLA Imkong L Imchen said, “The words ‘talks have concluded’ was repeated on several occasions by the Governor. The Governor’s statement on Naga issue was contradictory and total misleading.”

Imchen quoted Union Minister G Kishan Reddy’s statement on the Naga political issue: “Talks are at an advanced stage and no timeframe is to be indicated to conclude the talks.”

“Clarify the people of Nagaland that the talks on Naga political issue have concluded or admit that the House has made a mistake,” Imchen asked chief Minister Neiphiu Rio.

Meanwhile, CM Neiphiu Rio stated: “Governor RN Ravi, who is also the Interlocutor to the Naga talks, is the one who had announced that the Naga talks concluded on October 31, 2020 and not the State Government.”