The media house which was attacked by unidentified miscreants publishes two of the most popular newspapers in Manipur. 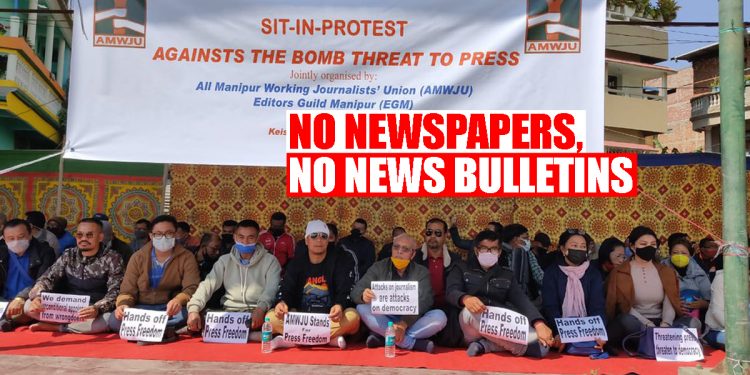 Local cable networks have blanked out news and newspapers have halted publication in Manipur as journalists in the State have extended their cease work strike.

The cease work strike is being carried out by the journalists in Manipur in protest against a grenade attack on the office of a media house.

The media house which was attacked by unidentified miscreants publishes two of the most popular newspapers in Manipur – Poknapham, a vernacular daily, and People’s Chronicle, an English daily.

The media house came under attack on February 13.

CCTV footages reveal that the media house was attacked by a girl, who is yet to be identified.

Journalists across Manipur have been staying off duty and are staging sit-in demonstrations in protest against the cowardly attack on the 4th pillar of democracy.

On Sunday, Manipur Chief Minister N Biren Singh had assured the protesting journalists that the culprits behind the attack would be nabbed and punished as per the law.

Notably, none of the outlawed underground groups from Manipur has claimed responsibility for the attack so far.

Earlier, Aribam Robindro Sharma, Editor of Poknapham, said they did not get any form of threats or intimidations from anyone.

Meanwhile, the All Manipur Working Journalist Union (AMWJU) held an emergency meet with the Editors Guild Manipur on Monday.

The AMWJU has taken up 5 resolutions following the emergency meeting with the Editors Guild Manipur.

Extension of the cease work strike is one among the 5 resolutions adopted by the AMWJU.