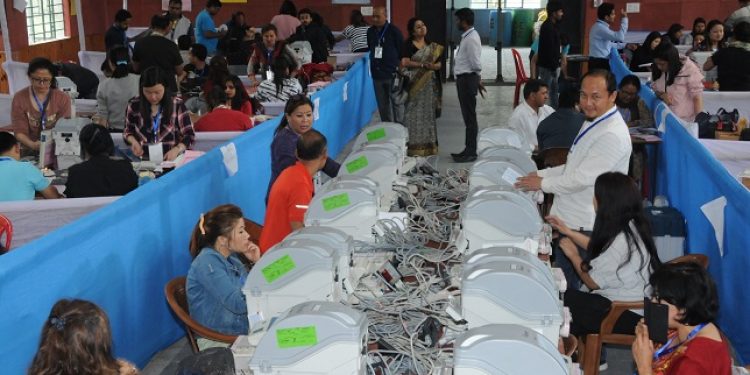 The mock poll for machines to be used for parliamentary constituency was done in accordance with the latest ECI guidelines on the EVMs and VVPATs before being put to use on the polling day.

The mock poll was conducted on five per cent of the total EVMs and VVPATS which were randomly selected by the election agents of the contesting candidates. Around 1000 votes were cast per machine in the mock poll and the votes were cross checked to ensure that the machines were functioning properly.

The observers for East District, Mousumi Chattaraj Chaudhuri and B Ram Shastri also visited the strongroom and inspected the process of the mock poll. They took stock of the progress from the returning officer and expressed satisfaction at the conduct and the arrangements in place.

The final briefing of polling parties will be done on Thursday and Friday at Manan Kendra which will be followed by postal ballot casting at the facilitation centre set up at Manan Kendra.

Only Polling parties will be allowed to cast their votes through postal ballots from 2 pm to 4 pm on both the days.