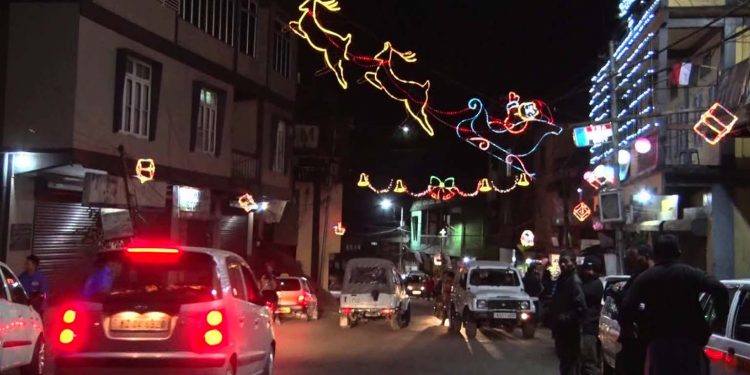 Barely two weeks after Mizoram was soaked in yuletide spirit and new year celebrations, normal life resumed on Friday with all government offices and commercial banks opened for the first working day.

Most business shops also began to up their shutters despite heavy rains.

Government offices, however, bore almost blank as the majority of the staff members, as well as customers, did not turn up on the first working day after new year celebrations.

Traffic appeared thin on the streets in Aizawl and other towns as people stayed indoors due to heavy rain that battered the state since morning.

The hilly state on Friday experienced the first rainfall of the new decade with a maximum temperature of 16 degree Celsius and minimum 11 degree Celsius.

Police said that no landslide and other natural calamity caused by heavy downpours were reported.

All educational institutions and political party offices will be opened from Monday.

Mizoram celebrated Christmas and New Year’s day, which were the first festivities after the new prohibition law came into force in the state.

New year celebration continued in many churches especially in the southern part of Mizoram on Friday.

Evangelical Church of Maraland (ECM), the largest denomination in Mara dominated Siaha district held a day-long mass prayer for the state on Friday.

The new law, which came into force in May, has banned the sale, manufacture, import and consumption of alcohol in Mizoram except in three ADC areas in the southern part of the state.

The state government had banned firecrackers and other fireworks and also tightened security during the festivities.

The jubilant people, however, welcomed and celebrated New Year’s day across the state with firecrackers and a spectacular display of fireworks, defying the ban.

The celebrations passed off peacefully as no law and order problem were reported during the festivities, police said.

Police sources also said that a Myanmarese national was held with 382.6 grams of heroin in Champhai town bordering Myanmar.

At least 16 liquor factories were damaged and 8 people arrested in this connection during the festive season.

Apart from these, five people have been arrested for allegedly illegally selling firecrackers and 23 non-tribals were pushed back to Assam for not possessing valid ILP during the festive season.

At least 3 people, including a minor, were also killed in road accidents during the period, according to police.