The Mizoram Liquor (Prohibition) Bill, 2019 was notified on Tuesday 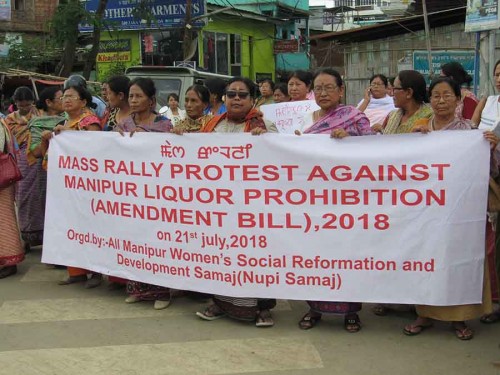 Protest being staged against liquor ban in Mizoram. (File image)

Mizoram has once again become a “completely dry state” following a new liquor policy that prohibits the sale and consumption of alcohol in the state.

He said the laws in the new Bill could not be implemented immediately after Mukhi’s assent as the model code of conduct (MCC) in force for the Lok Sabha polls and Assembly by-elections.

“The Election Commission on Sunday afternoon lifted the MCC. The Mizoram Liquor (Prohibition) Bill, 2019 was notified on Tuesday,” Beichhua said.

He said that the ruling Mizo National Front (MNF) was committed to fulfilling its pre-poll promise made to the people before the Assembly polls.

“We are happy that the MNF government fulfilled one of its major pre-poll commitments,” Beichhua said.

He said that the state government would lose revenue to the tune of Rs 60 to Rs 70 crore annually following the decision.

The Minister said that the MNF government had decided to ban production, import, sale and consumption of liquor for the common people, except defence personnel and those with medical needs.