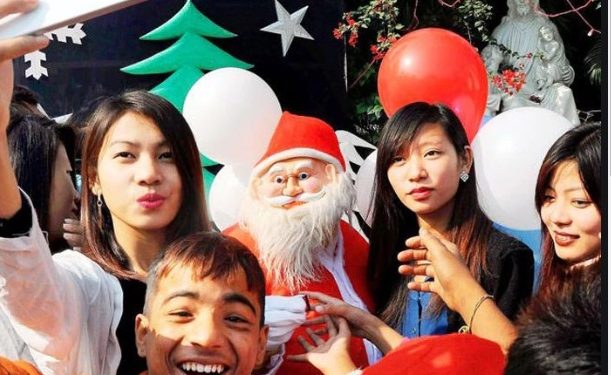 Police authorities in all the states have made extensive security arrangements to prevent any untoward incidents during the festivities.

The authorities in some of the northeastern states were extra careful in view of the recent protests against the new Citizenship Act.

According to district administration and police officials in Mizoram’s capital Aizawl the Christmas-eve revelry was entirely peaceful.

The annual festive spirit was evident everywhere in the capital town and other places in Mizoram as revellers made colourful decorations and illuminations.

Church services and Christmas and community feasts are being held on Tuesday and Wednesday in most of the villages and urban areas of the mountainous state.

This time Mizoram is witnessing the 149th year of Christmas celebrations after it was first celebrated by the colonial British troops back in 1871.

People of different communities were seen in the markets, shops and shopping malls in different parts of the state buying essential items including Christmas goodies and gifts.

Besides the beautification of churches, Christmas trees with bells and lights have been put up at homes and in streets. Most of the streets have been illuminated.

In Nagaland, Christmas and New Year celebrations began a few days back in line with tradition.

Various Churches presented Christmas pageants consisting of songs, stage plays and the message about the birth of Christ and the importance of Christmas.

Nagas, an indigenous people stretched across several states in the northeast and also in Myanmar, are predominantly Christians.

Churches in Nagaland, where Christians account for more than 90 per cent of the population, have been holding a variety of week-long programmes since Christianity took root in the state more than 140 years ago.

Christmas celebrations, however, remained a low-key affair in Assam amid ongoing protests against the Citizenship Amendment Act (CAA).