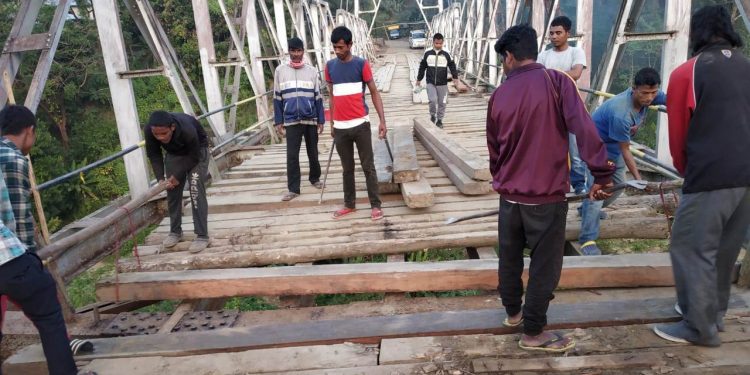 The bailey bridge, located about 39.5 km from Lunglei, is the lifeline of the south-western belt in Mizoram.

The south-western belt of Mizoram has remained cut off from rest of the state due to the partial collapse of a bailey bridge over Phairuang river on the National Highway 302.

The highway links south Mizoram’s Lunglei town with Tlabung near the Bangladesh border.

The bailey bridge, located about 39.5 km from Lunglei, is the lifeline of the south-western belt of the state including a border town of Tlabung.

State PWD engineer-in- chief K Lalsawmvela said that at least 12 vehicles, including three heavy trucks and many commuters were stranded since December 24 when the bridge was partially collapsed owing to cracking of the steel cross beam.

He said that repairing work is in progress and the bridge is likely to be opened for vehicles around 10 pm on Sunday.

According to the official, the cable stayed steel suspension bridge was constructed by the Border Road Organisation (BRO) 39 years ago and has become fragile and weak.

It is a wooden decking bridge and has been too old to be heavily used, he said.

He said chief minister Zoramthanga had appealed to the Union ministry of road transport and highways (MoRTH) and met the concerned minister on three occasions to allocate and sanction fund for the construction of new bridge as a standalone project.

Lalsawmvela said that the bridge is vulnerable to collapse if sanction is not expedited and new concrete bridge is constructed in time.

There are more than 50 bridges across the state, which are under the PWD and some of them are in vulnerable condition, sources said.

So far, at least four people have been killed due to bridge collapse, which occurred on six occasions since 2014.