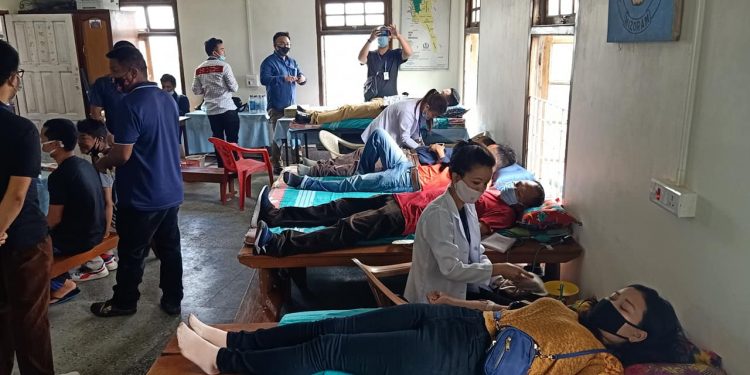 Mass voluntary blood donation camps were held across Mizoram on Tuesday under the aegis of Mizo National Youth Front (MNYF) in view of the Mizo peace accord day.

No official function could be held to celebrate the 34th anniversary of ‘Remna Ni’ or signing of the historic ‘Mizo peace accord’ between the central government and the erstwhile underground MNF this year due to the coronavirus induced lockdown.

As many as 264 units of blood were donated during the mass voluntary donations, the sources said.

Mizoram chief minister and Mizo National Front (MNF) president Zoramthanga on Monday had said that the Mizo peace accord was one of the successful peace accords ever signed not only in the country but in the world.

He had said that the peace accord was endowed to the Mizos by the almighty though it was not upto the satisfaction of either the MNF or the Centre.

Zoramthanga attributed the signing of Mizo peace accord to the answer of prayers by people, NGOs and churches, which ended two decades of insurgency and unrest in Mizoram.

Mizo Peace Accord was signed between the government of India and MNF on June 30, 1986, ending two decades of insurgency, after which Mizoram became the 23rd Indian state on February 20, 1987.

The MNF was a secessionist movement to protest against the negligence and indifference of the Government of India to the people of Mizoram at the time of a severe famine (mautam) during the late 1950s.

After a major uprising followed by years of struggle in underground activities, but to no avail, the movement conceded to work within the Indian constitution and to renounce violence and turmoil that had prevailed throughout Mizoram.

Mizoram was a part of Assam until 1972, when it was carved out as a Union Territory.

The official document entitled Mizoram Accord, 1986, Memorandum of Settlement was the landmark that restored peace and harmony in the State.