Area-wise moderation will be enforced as per Task Forces Committee regulations: Zoramthanga 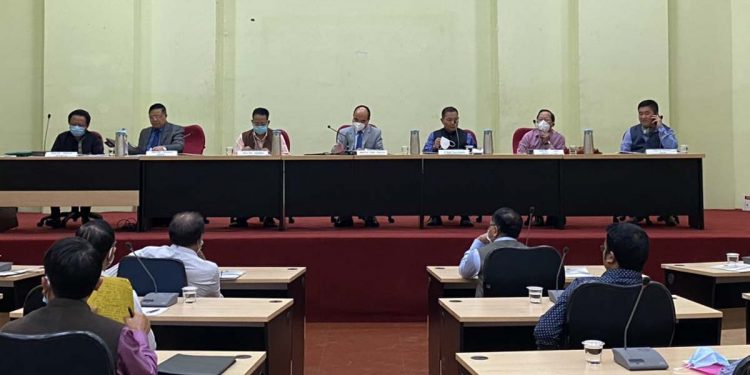 A view of the Mizoram Cabinet on Monday. Image credit - Twitter

The Mizoram Cabinet on Monday resolved to extend the ongoing lockdown for two weeks till April 30.

The 21-day nationwide lockdown was announced by Prime Minister Narendra Modi from March 24 midnight as a preventive measure to contain the spread of COVID19.

The decision was taken by the State Cabinet during a meeting held in the morning on Monday under the chairmanship of Mizoram chief minister Zoramthanga.

However, the Cabinet decided that area-wise moderation will be enforced as per Task Forces Committee regulations.

Informing about the Cabinet’s decision, chief minister  Zoramthanga on his Twitter handle said:  “Lockdown will be extended within the state of Mizoram till 30th of this month i.e. April, 2020.”

“However, area wise moderation will be enforced as per Task Forces Committee regulations!” he added.

Informing about the discussion on the COVID-19 pandemic and the state’s preparedness to face the situation, Zoramthanga said, “Had a meeting with Council of Ministers this morning regarding the way forward during this Covid-19 pandemic.”

He also said: “Will hold another meeting with NGOs, political parties and officials soon. Stay tuned for more details.”

On Monday, Tamil Nadu also announced to extend the lockdown till April 30.

The announcement was made by Tamil Nadu chief minister K Palaniswami.

During interactions with Prime Minister Narendra Modi via video conferencing recently, the chief ministers of the country suggested extension of the lockdown beyond April 14.

Earlier, it was reported that the central government was considering an extension of the nationwide lockdown for two more weeks up to April 30.

In a tweet, Kejriwal stated: “PM has taken correct decision to extend the lockdown. Today, India’s position is better than many developed countries because we started lockdown early. If it is stopped now, all gains would be lost. To consolidate, it is important to extend it.”

Prime Minister will address the nation on Tuesday when he is likely to announce the extension of the nationwide lockdown.