The Election Commission of India in consultation with Mizoram government has appointed Ashish Kundra IAS (AGMUT: 1996) as the new Chief Electoral Officer (CEO) of Mizoram.

Ashish Kundra, replaced SB Shashank following demand for his ouster by a conglomerate of civil society and students’ organizations. 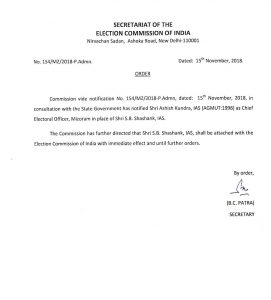 Former CEO SB Shashank had reportedly sought deployment of additional Central Armed Police Forces (CAPF) in the state and complained to the EC that the state’s former Principal Secretary Lalnunmawia Chuaungo was “interfering with the poll process”.

Chuaungo, a native of Mizoram and a Gujarat-cadre IAS officer was relieved of his duties earlier this month.

The NGO Coordination Committee – a conglomerate of civil societies and student organisations – along with other political leaders, had been demanding Shashank’s exit from the state since then.

Covid-19 vaccination: 45,000 health workers to be immunized in Tripura