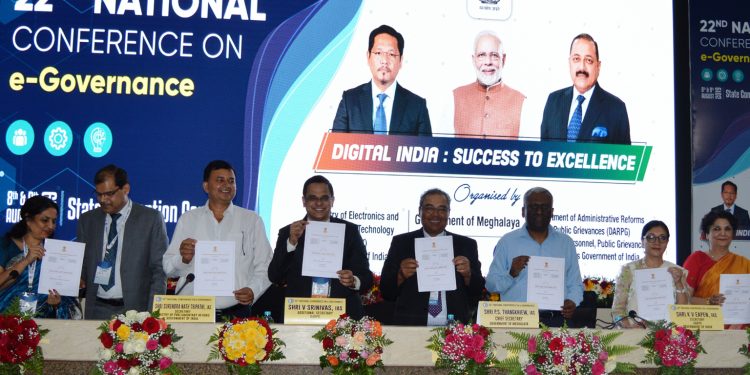 The 22nd national conference on e-governance adopted the ‘Shillong Declaration’ on the final day of the two-day of the conference.

The declaration has outlined the future trajectory that would be taken in terms of e-governance with a focus on improving connectivity in Northeast.

The two-day conference that began on Thursday concluded on Friday in Shillong and it was the first-ever conference held in the Northeast.

The Shillong Declaration was adopted and declared during the valedictory function at the State Convention Centre on Friday evening.

The Shillong Declaration was adopted so that the important ideas that emerged during the sessions of the conference may be referred to and developed in the future.

The 10-point declaration was an outcome of a commitment made at the inaugural session of the conference.

It was framed after two days of intensive deliberations among senior officials, experts and representatives of 28 States and each Union Territory.

The declaration resolved that the central government and state governments would collaborate to improve the citizens’ experience with government services.

In order to do so, they would promote the timely implementation of India Enterprise Architecture (IndEA).

They would also implement a single sign-on for interoperability and integration among e-Government applications throughout the country.

It also resolved to consolidate the plethora of successful state-level e-Governance projects and domain-based projects with a focus to replicate them as common application software with configurable features.

The declaration also stressed the need to ensure improvement in ease of living and ease of doing business by making a big shift in the role of government from Service Provider to Service Enabler.

The conference also included in the Shillong Declaration the need to take steps to further improve connectivity in the Northeast.

Issues and challenges of telecommunication connectivity at the grassroots and formulate and implement a comprehensive telecom development plan were also addressed in the declaration.

It was also resolved to improve the quality of delivery of e-Services in the Northeast to fulfil the vision of improved citizen experience.

It was also resolved to develop India as a global cloud hub and facilitate the development of Government applications and databases on Cloud by default.

To adopt emerging technologies for finding e-Governance solutions and to promote the Digital India Projects with focus on Smart Cities and Smart Villages through Startups and Smart Entrepreneurship were also resolved in the declaration.

The two-day National Conference on e-Governance was organised by the Department of Administrative Reforms & Public Grievances, Ministry of Personnel, Public Grievances & Pensions and Ministry of Electronics & Information Technology in collaboration with the Meghalaya Government.

The conference was an attempt to streamline e-governance services for effective policy implementation while helping to bridge the technological divide.

The conference witnessed a huge turnout of 535 delegates representing 28 states and each Union Territory.

The conference provided a space for debating values and norms, standard-setting, multi-stakeholder initiatives on various issues of e-governance.