Meghalaya groups announce ‘direct action’ stir, to implement ILP on its own! 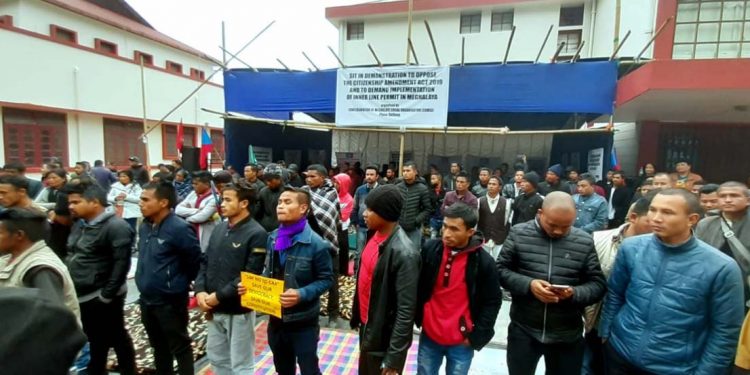 The Confederation of Meghalaya Social Organisation (CoMSO) announced its next phase of stir called ‘direct action’ and said it would implement the Inner Line Permit (ILP) in Meghalaya on its own.

The CoMSO announced the agitation in protest against the delay in the implementation of the ILP in Meghalaya.

CoMSO, a conglomerate of several organizations, announced the agitation after ending its five-day evening sit-in demonstration against the Citizenship Amendment Act (CAA), 2019 and delay in implementation of the ILP in Meghalaya.

“Our next agitation will be ‘direct action’ where we will implement the ILP by ourselves,” CoMSO chairman Robertjune Kharjahrin announced on Saturday.

CoMSO ended the five-day sit-in-demonstration on Saturday which started on February 4 every evening from 2 pm to 5 pm. The protest was held at the premises of the State Central Library.

Kharjahrin said CoMSO would continue opposing the CAA and demanding the implementation of ILP in the state.

Kharjahrin said, “If the Centre is not willing to give us ILP, we will implement the ILP on our own.”

He said now their new slogan is “No ILP, No Rest, No ILP, Direct Action”.

To begin its direct action agitation, CoMSO will deploy its volunteers from February 12 in all infiltration check gates to assist the Directorate of Infiltration of the state government in detecting and pushing back outsiders who are without any valid documents.

The union home minister, however, told Conrad Sangma that the issue would be discussed after the Delhi Assembly elections.

Polling to the Delhi Legislative Assembly was held on Saturday, and the counting of votes will take place on February 11.