Congress to do ‘everything’ against Citizenship Bill 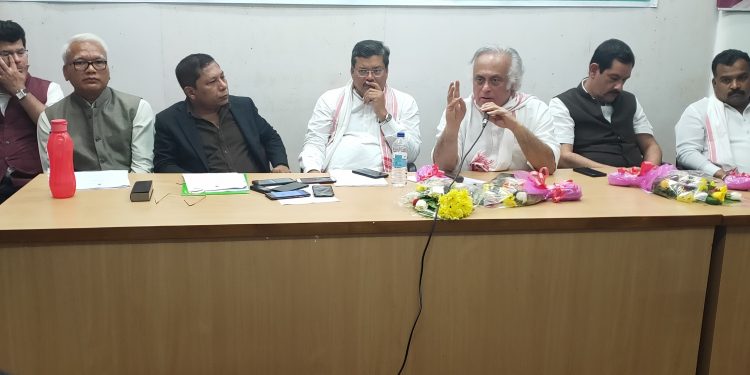 The All India Congress Committee (AICC) has assured of doing ‘everything’ to oppose the Citizenship Amendment Bill (CAB).

The AICC also asked the NDA government not to take the National Register of Citizen (NRC) exercise outside Assam, without political consensus on it.

AICC leader and former union minister Jairam Ramesh told reporters at Congress Bhawan here on Monday said the Congress would oppose the CAB and seek support of other parties in both Houses of Parliament if the Bill is brought by the BJP-led NDA government for passage.

Ramesh was part of an AICC team that visited Meghalaya to gauge people’s views on issues affecting the state and Northeast like the CAB and National Register of Citizen (NRC) being implemented in Assam.

The AICC team, formed up by Congress president Sonia Gandhi, has been led by former union minister Mukul Wasnik.

Ramesh termed the CAB as a “BJP and RSS project” aimed at dividing people on religious lines.

“The CAB can never be accepted because it violates Article 14 and Article 21 of the Constitution, divides people, anti-secular, and anti-Constitution,” he alleged.

On Congress not having requisite number of MPs in Parliament to stall the CAB, Ramesh said politics is more than a number game and it is about standing up for principles and for values.

“We may not have the numbers in Lok Sabha or Rajya Sabha, but will continue to fight,” he said.

Ramesh said the Congress is taking a principle stand on the CAB because it is destroying the very basis of the Indian Constitution and making religion, the basis of citizenship.

On NRC exercise, Ramesh said though there were talks about the presence of millions of illegal immigrants, but now only 19 lakhs of them were detected.

Terming NRC a complicated exercise making it difficult for poor people to have documents, Ramesh said, the Congress is ready for a dialogue to have a harassment-free NRC.

“You and I will have papers but a large majority of our citizens do not have papers. We should learn our lesson from the implementation of NRC in Assam, before embarking on another NRC exercise,” he added.

He also said it is for the BJP to see the outcome of elections results in Maharashtra and Haryana as it went to the polls on the abrogation of Article 370 and NRC.

“How can people who have served in Indian Army and paramilitary forces and people from Meghalaya, who got married in Assam be part of the 19 lakhs detected illegal immigrants?” he questioned.

Ramesh said to repeat NRC exercise in other states, it requires lots of homework.