Indian citizenship should not be granted to any foreigner without the consent of the state: Sanbor Shullai 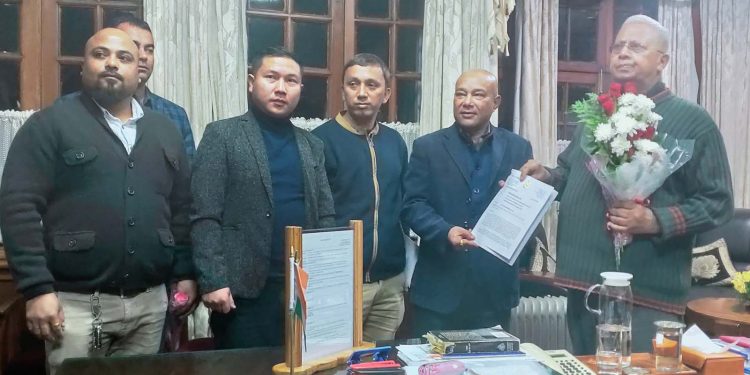 Shullai met the governor at the Raj Bhavan on Tuesday evening and handed over the memorandum addressed to the President.

Shullai emphasized the need to exempt Meghalaya from the CAB as per Article 244 paragraph 12A (b) of the Sixth Schedule, which states that the President may with respect to any act of Parliament, by notification, direct that it shall not apply to an autonomous district or an autonomous region in the state of Meghalaya.

The MLA said the scheduled area can be also exempted on the basis of reservation of such state under the provision of the 95th amendment of the 2009 Act which provides the entire Meghalaya under the reservation of Scheduled Tribe (ST) as both Lok Sabha seats in Meghalaya are reserved for ST.

The BJP legislator also said Indian citizenship should not be granted to any foreigner without the consent of the state.

“The migration of people in like Paliltan and Afghanistan was mostly due to religious persecution.”

“However, the issue concerning illegal immigrants from Bangladesh cannot be identified on the basis of religion as there is large-scale influx of in search of jobs rather than religious persecution which is the prime motive for granting of citizenship as stated in the CAB,” said Shullai.

“The bill may be misused for granting of citizenship as it is difficult to identity people in the name of religion,” he added.

Shullai also said people and several organizations in the Northeast have opposed the bill as it will nullify the provisions of the Assam Accord of 1985 which fixed March 24, 1971 as the cut-off date for identification and deportation of all illegal immigrants irrespective of religion.

He further said as the modified version proposed to tweak the CAB so that it will not override the Bengal Eastern Frontier regulation of 1873 under which Indian nationals have to take the inner line permit to enter into Arunachal Pradesh, Nagaland and Mizoram.

The ILP system can be also introduced in the entire Northeast to solve the problem of influx in all these states, said Shullai.

Meanwhile the Khasi Hills Autonomous District Council (KHADC) has also passed a resolution seeking exemption of Meghalaya from the applicability of CAB from tribal areas and the whole state of Meghalaya.

The resolution was supported by all members of the Council including members from the opposition Congress.