The shutdown will end at noon on Wednesday 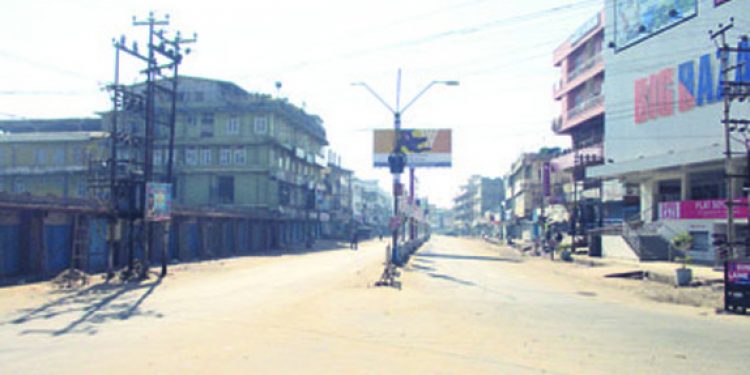 A view of Dimapur town during bandh. (file image)

The 18-hour Nagaland shutdown against the Citizenship (Amendment) Bill began at 6pm on Tuesday with shops and business establishments downing their shutters across the state.

The shutdown will end at noon on Wednesday.

There were no reports of any untoward incident during the initial period of the bandh called by the Joint Committee for Prevention of Illegal Immigrants (JCPI) at the directive of the North East Forum for Indigenous Peoples (NEFIP).

NEEIP is spearheading the movement against the bill in the Northeast region.

Sources said adequate security arrangements have been put in place to thwart any untoward incident.

Though vehicular traffic and examinations have been exempted, the NEFIP and JCPI, in a joint release on Tuesday, asked the public to stay indoor and the business establishments to voluntarily down their shutters during the bandh period.

Both the organisations urged the people of the state to extend their cooperation and to give a collective message to the government of India to withdraw the CAB.

“The appeal is purely a conscience call to reject the ‘monstrous bill’. This few hours of sacrifice will go a long way to determine the destiny of our future generations,” they said.

The Naga Students Federation also placed on record its total resentment against the proposed bill.

It assured the public that it will leave no stone unturned in order to ensure that the bill does not see the light of the day.

The Naga Mothers’ Association expressed solidarity with the JCPI and the NEFIP and extended its support to the statewide shutdown.

The Nagaland Tribes Council also extended support to the voices of the indigenous people being raised in Nagaland under the banner of JCPI and NEFIP.

The council appealed to the indigenous people of Nagaland, tribes hohos, various civil society organisations, youth and student bodies to express solidarity against the bill and extend all possible support to the movement.