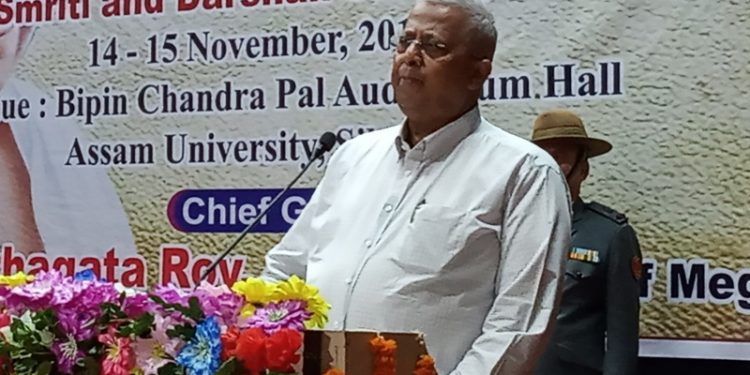 Meghalaya governor Tathagata Roy speaking at the seminar in Silchar on Thursday.

Meghalaya governor Tathagata Roy on Thursday said in Silchar that during UPA regime more incidents of ‘intolerance’ took place in the country.

“The incidents of ‘intolerance’ during the NDA government are far less than what it was during the Congress regime,” Roy said.

Governor Roy was in Silchar to attend a seminar on “Gandhi’s Way of Peace: 21st century Perspectives” at Assam University.

“How many people have been lynched? Is there any official figure?”

“Since 1977 till 2011, there have been innumerable political killings. But nobody talks about that,” said Roy.

On being asked as to how Mahatma Gandhi would have perceived the present day India, he said, “I think he would have been pleased. He understood the importance of religion very well in the lives of Indians which earlier had been ignored in the name of ‘secularism’.”

On being asked on the proposed amendment to the Meghalaya Residents Safety and Security Act, 2016, the governor refused to comment.

“I am yet to get any official communiqué in this matter. I have left Shillong on Wednesday evening and till now I have not received any papers for the same,” Roy said.

Meghalaya government has recently brought an ordinance that makes registration on entry mandatory for visitors who intend to spend more than 24 hours in the state.

The cabinet approved an amendment to the Act to include this provision amid demands for an inner line permit (ILP) system to stop illegal immigration into the state.