The Meghalaya government has directed the local taxi drivers of the State to ferry passengers without overcharging them after serious complaints regarding the same have been received from the public.

The State Government has also received complaints from the public that some of the local taxi drivers also refuse to ferry passengers whenever they ask them. 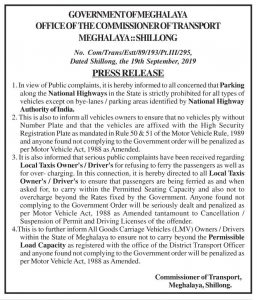 After receiving a number of such complaints, the Meghalaya government recently directed the local taxi drivers to ensure that passengers are being ferried when they ask them to do so and that too without charging amount of fares failing which strict action will be taken against them.

The taxi drivers were also warned that if they were found carrying passengers above the permitted seating capacity and charge fares beyond the government fixed rates, they will be penalized as per the amended rules of Motor Vehicle Act 1988 and their driving licenses might also be cancelled.

The state government has also banned parking of all kinds of vehicles along the national highways in the state for public convenience.

Moreover, the state government also directed the drivers and owners of good carrying vehicles to ensure that they do not carry loads beyond the permissible load capacity otherwise they will be penalized as per the amended rules of Motor Vehicle Act 1988.

The government also directed the people of the state to ensure that their vehicles are affixed with number plates and if any person is found to be driving a vehicle without a number plate, he/she will be penalized as per the amended rules of Motor Vehicle Act 1988.