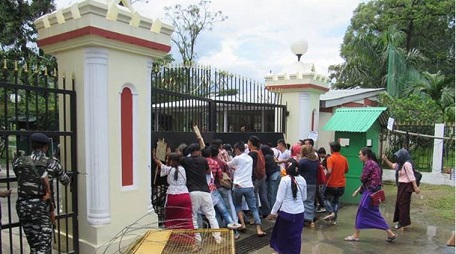 At least eight volunteers of the Democratic Students Alliance of (DESAM) were injured on Monday when police resorted to baton charge at the gate of the office of the ruling Bharatiya Janata Party (BJP) here demanding removal of Manipur University (MU) Vice Chancellor Prof Adya Prasad Pandey.

According to reports, police jumped on the volunteers of the DESAM when the latter tried to storm the State BJP office demanding immediate end of the ongoing Manipur University crisis and announcement of the pending semester examinations of the colleges.

“At least 8 volunteers of DESAM including the general secretary of DESAM, Shital Oinam, were injured during Monday’s incident,” informed sources.

The DESAM volunteers stormed the gate of the Imphal Raj Bhawan and the nearby BJP office in the afternoon on Monday. The DESAM has been supporting the agitation jointly launched by the students, teachers and staff members of Manipur University, holding VC Pandey responsible for administrative and financial irregularities in the university.

It may be mentioned that due to the ongoing crisis in Manipur University which is a Central university, results of the semester examinations of various graduation courses have been kept on hold.

Philemcha Baleshwar Mangang, DESAM publicity secretary told the media, “We demand that the Manipur University crisis be resolved by the Government as soon as possible.”

While condemning the police action on their volunteers, Mangang said, “We strongly condemn the brutal action of police on our members.”

Meanwhile, intensifying its agitation demanding removal of the Vice Chancellor of Manipur University Prof Pandey, a 48-hr statewide general strike has been called in Manipur from July 17 midnight till July 19 midnight.

This was announced by president M Dayaman of Manipur University Students Union (MUSU) during a hurriedly called press conference on Monday.

Stating that MUSU had been continuing various forms of democratic protest, he said but the authorities concerned continued to remain indifferent attitude to the movement.

MUSU also condemned the alleged police action on the volunteers of the DESAM when the latter tried to storm the State BJP office demanding immediate end of the ongoing Manipur University crisis and announcement of the pending semester examinations of the colleges.