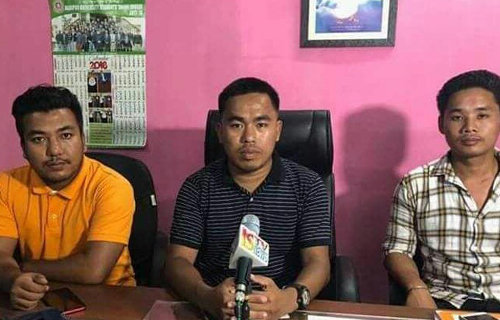 A 48-hr statewide general strike, demanding removal of the Vice Chancellor of Manipur University Prof Adya Prasad Pandey has been called in Manipur from July 17 midnight till July 19 midnight.

This President M Dayaman of Manipur University Students Union (MUSU) announced this decision during a press conference on Monday.

Stating that MUSU had been continuing various forms of democratic protest, he said but the authorities concerned continue to remain indifferent to the movement, so intensifying the agitation the strike has been called.

He said there will be no compromise except for the removal of Prof Pandey besides a high-powered enquiry.

Expressing that they understand calling a general strike will affect the daily activities, but we have no option as the authorities concerned are ignoring the demands, but to launch such movement, said Dayaman.

The student leader of the university also appealed to the likeminded students’ bodies of the state and other civil society organizations to support the upcoming protest in order to save the University and future of Manipur.

However the upcoming general strike will exempt the essential services including the religious programmes in the state will be exempted from the purview of the strike.

MUSU also condemned the alleged police action on the volunteers of the Democratic students’ alliance of Manipur (Desam) when the latter tried to storm the state BJP office demanding immediate end of the ongoing Manipur University crisis and announcement of the pending semester examinations of the colleges. The general secretary of Desam Shital Oinam was serious injured during Monday’s incident.

Meanwhile in a joint emergency meeting of its executive members of Manipur University Teachers Association, Manipur University Staffs Association and MUSU condemned the alleged security forces brutality towards the volunteers of the Desam. Demanding a magisterial enquiry, it also further resolved that “institution independent High Power Committee to probe into the financial and administrative irregularities in Manipur University.