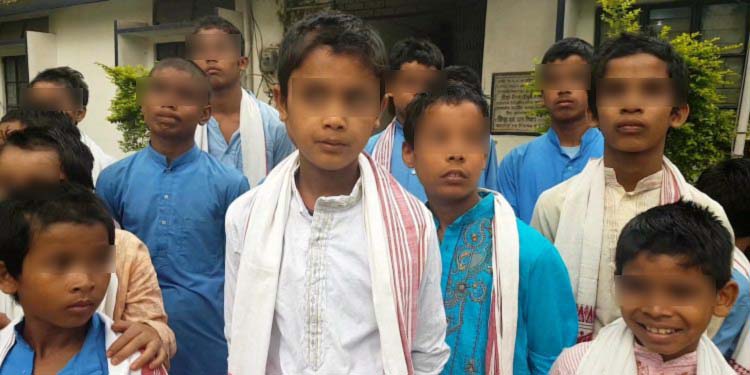 The victimised students of Auniati High School in Majuli

The headmaster of Auniati High School of Majuli in Assam Prashanta Dulakasharia whose outrageous act of cutting hair of 22 students of the school in a disarrayed manner was widely condemned, has been transferred by the Directorate of Secondary Education.

The Inspector of Schools of Jorhat district, Subhalaxmi Rajkumari who also holds charge of Majuli has also suspended two other assistant teachers of the school for their involvement in the outrageous act.

Rajkumari decided to take action against the accused persons after preliminary investigation.

The students of various schools of Majuli on Monday made appearance in their classes in black badges in order to protest against Dulakasharia.

During the time of prayer in the morning on Saturday, the headmaster of Auniati Satra High School in Majuli had cut the hair of the 22 students of the school in a haphazard manner on the ground that they kept their hair long and coloured.

Feeling humiliated at the act of the headmaster, the victimised children after reaching their respective huts in Auniati Satra broke down before their guardians while narrating the whole incident.

The senior Vaishnavite followers were shocked at the act of the headmaster as it has harmed the Sattriya culture and tradition.

They also called on the deputy commissioner of Majuli district Debaprasad Mishra along with the victimised school children to complain against the headmaster’s act.

Besides lodging complaint with the deputy commissioner, a case has also been filed in Majuli police station against the headmaster.

The Majuli Deputy Commissioner had ordered an inquiry into the incident.

On the other hand, the headmaster of the school, when asked about his act of alleged moral policing, mentioned that he had cut the hair of the school children for their behaviour of ‘indiscipline’ and coming to school colouring their hair.