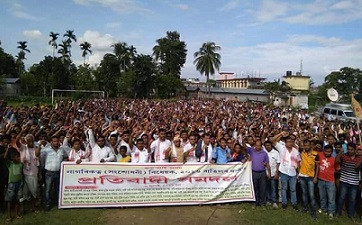 While addressing a mass rally against the Citizenship (Amendment) Bill, 2016, farmer leader and noted RTI activist Gogoi also alleged, “Prime Minister Narendra Modi asserted before the Assam Assembly elections that the illegal foreigners would have to leave with bag and baggage from the State within May 16, but now his Government is planning to give shelter to 1.90 crore Hindu (Bangladeshi) foreigners.”

Gogoi stated, “The Union Government has already directed the State Governments to arrange necessary measures for  procurement of land in anywhere in India, to open bank accounts, provide Aadhaar cards and employment for people belonging to six religions hailing from  foreign countries. But at the same time, the Government is yet to provide land patta  to the people of  tea tribes, Adivasis, who came to Assam 200 years ago or the indigenous  people of Assam, who have no land.”

The KMSS leader also said, “Due to such reasons, the people of Assam have spontaneously come out to the streets in protest against the Citizenship (Amendment) Bill.”

The leaders representative various organisations said, “If necessary, the people of Assam will collect money door-to-door for purchase of the said land where the orchid park. The meeting was anchored by Dulal Kalita. Later, a protest rally was also taken out throughout the Amguri town by shouting slogans.