More and more women are taking up different forms of Martial Arts for self-defence: Prithviraj

Born to Assamese and Parsi parents, Prithviraj Manik Chowdhury’s love for Martial Arts began at a tender age while he was a school student at Maria’s Public School, Guwahati.

Chinese Soap Operas, he says, first acquainted him to the world of Martial Arts. At an age when most kids loved superheroes and comics, Prithvi was busy taking shine to Bruce Lee, Jett Li, Jackie Chan, Michael jay and Scott Adkins.

The 29-year-old has spent the last seven years practicing Kyokushin, which is a style of stand-up fighting. Kyokushin is a relatively new form of Martial Art which is deeply rooted in a philosophy of self-improvement, discipline and hard training.

A Black belt in Kyukoshin and a Red belt in Taekwondo, Prithvi also turned an entrepreneur in January this year, when he started his one-of-its-kind outdoor garden restaurant – Patty Oh! – as a tribute to his love for burgers, in Guwahati.

In an exclusive interview to Rifa Deka, Choudhury talks about his journey, exploring the world of Martial Arts, competing in National level tournaments and bringing pride to the Northeast.

How did you start practicing Martial Arts? Tell us a little about how you first clued in and got a picture about Martial Arts.

I grew up watching Chinese Soap Operas and films like ‘Fist of fury’. I was drawn towards the warrior-like spirit exhibited by great Martial Artists such as Bruce Lee, Jett Li, Jackie Chan, Michael jay White and Scott Adkins. I started receiving my formal training at a time when it was compulsory in Maria’s Public School, where I did my schooling. Jubilee Ma’am was my teacher back then, who first introduced me to taekwondo and that’s how I step foot into the world of Martial Arts.

What are the Martial Art forms you have trained in? Which Martial Art do you think encapsulates all the right elements?

For the last 7 years, I’ve been practicing Kyokushin, I still practice every single day and it is the first thing I do every morning, I start my day with it. The basic difference between Taekwondo and Kyokushin is that Taekwondo is regarded as a sport, where you have rules, points and guards whereas Kyokushin is regarded as Combat. A combat without guards, where one is allowed to strike anywhere on the body and the match goes on until you’ve knocked your opponent down. So these are the two forms of Martial Arts I have trained in.

Amidst all this hype about evolved Martial Art forms and Mixed Martial Arts, do you think people are slowly drifting away from practicing and training in traditional Martial Arts?

I’d love to train in MMA, if not MMA, then at least in grappling. I know my strengths now, I can fight my opponent standing but there is room for me to learn and better myself. There are parts of me that still lack confidence in areas that can be worked upon through MMA and I’m certainly willing to evolve with the times. 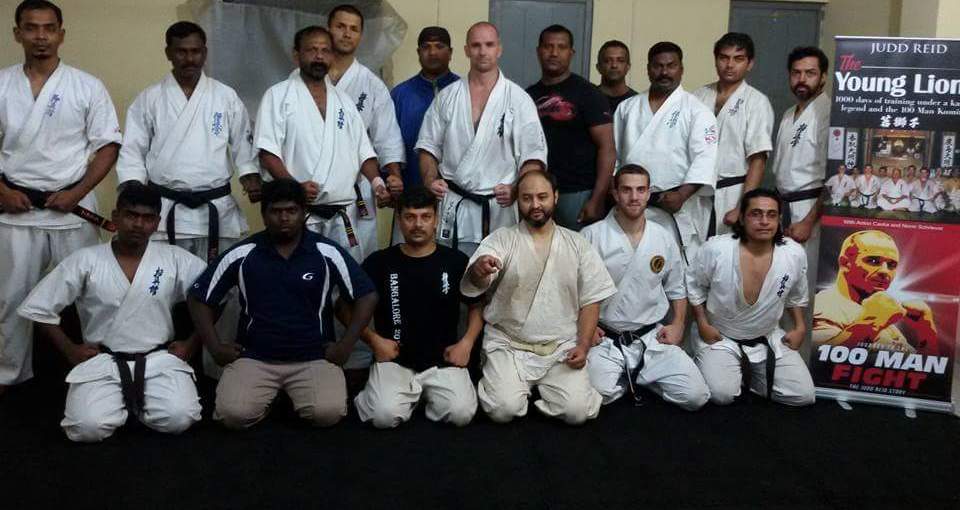 Any form of Martial Art requires strict discipline. Were you always disciplined as a child?

I was not disciplined at all as a child. There also came a phase in my life when I was going through a lot of depression and I indulged in substance abuse. Gradually, I got inclined towards spirituality as I closely observed the teachings of Rakum Sensei.

I started to idolize him when I heard his story. I got to know about how he had nothing when he landed in India but his Kyokushin spirit helped him achieve greatness in the field of humanity through his NGO. He went to Japan to learn from the great Masutatsu Oyama (founder of Kyokushin) himself.

He currently runs the NGO- Shri Acharya Rakum School for the Blind. It is a big NGO, which disciplines students in Kyokushin. Discipline came with Kyokushin in my life for sure, as the name literally translates to ‘the ultimate truth’.

I set out on my journey to look for the ultimate truth. Kyokushin taught me a lot, I learnt to never give up and push myself beyond my limits. In life, there will be obstacles… big boulder like obstacles, but the Kyokushin Karateka must punch it down till it breaks only then will your paths open up, one by one and for that discipline and determination are a must!

Is ‘Mind over Muscle’ true in Martial Arts? Does having a stronger will than your opponent really help in an unarmed combat?

Yes, I believe it to be absolutely true. I’d like to quote the great Lyoto Machida here who once said, “Technique beats strength, but the spirit beats technique!” 90% of your battle is mental, so having a stronger will against your opponent definitely helps in an unarmed combat, or any combat for that matter.

What challenges did you have to face while trying to achieve your goals in the field of Martial Arts?

Nothing that one ever does lacks challenges, there are challenges everywhere. I myself have had to face tones of them; however there was one thing in particular that I would like to mention with regards to government and funding. A few years ago, although I was invited to international tournaments such as Russia- the Kyokushin World Union Championship and a few other tournaments in Malaysia and the Philippines, I couldn’t participate.

I appealed to the government and wrote twice to the sports ministry seeking funds for the same, but there was no response from anywhere. The Northeast is beaming with talented young Karatekas and Martial Artists waiting to be given an opportunity to represent their state and their country at the International level. There is definitely need for funding from the government to encourage such young talents.

What direction do you see the Martial Arts, as a whole, heading towards? Where do you think, the future of Martial Arts lies in Northeast and across the subcontinent?

Martial Arts have a very bright future, whether we speak of the current scenario of the Arts within the Northeastern region or the entire nation. The potential for this is great and we have young talents rising out of every nook and corner of the country. More and more women are taking up different forms of Martial Arts for self-defence and as a sport. Martial Arts begets confidence; people have started to recognize that. In a world where safety and security is our utmost concern, Martial Arts gives people the confidence of being able to defend themselves and those around them singlehandedly.