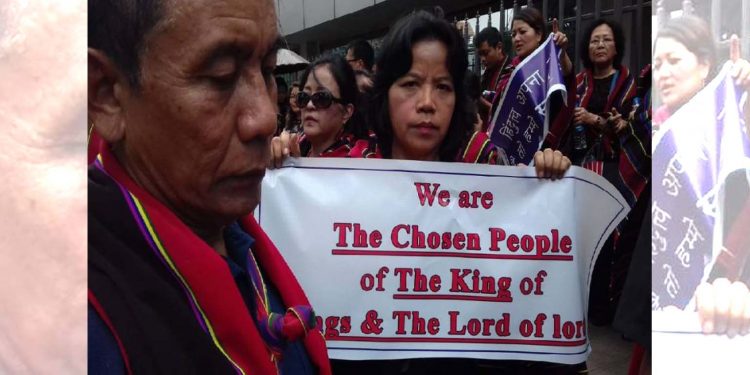 A view of protest against Amit Shah's visit at Aizawl on Saturday. Image credit -www.outlookindia.com

Union home minister Amit Shah, who has been vocal in favour of the Citizenship Amendment Bill (CAB) during his recent speeches anywhere in the country, refrained from making a single comment on the issue in Mizoram.

Amit Shah, who made his maiden visit to the northeastern state after assuming the charge of union home minister, however, had to face protests by some organizations showing placards with anti-CAB writings on it.

Majority of the NGOs, students’ bodies and civil society organizations have opposed the CAB and decided to put up a joint demonstration during the visit of Shah.

Mizo Zirlai Pawl (MZP) had decided to protest by wearing a black cloth, normally worn by the Mizos during funeral, to oppose the CAB.

Several agitating organizations, however, withdrew their agitation on Friday evening and decided to meet the union home minister if he desires so.

But organizations like People’s Representation for Identity and Status of Mizoram (PRISM) Party and Mizoram People’s Conference (MPC) continued with their opposition to the visit of the home minister.

Shah, while addressing a gathering after inaugurating the North East Handloom & Handicraft Exhibition 2019 at Aizawl, avoided the issue of CAB and National Register of Citizens (NRC) and only highlighted the development agenda of the BJP-led NDA government at the Centre.

“Handloom holds the capability to generate huge employment opportunities in the Northeast and play an important role in the growth and development of the people,” he said.

“During the first Narendra Modi government, bamboo was taken out of the list of trees that were prohibited for felling due to environmental concerns.”

“With this decision, the availability of bamboo has been increased to facilitate the handicrafts sector by the government,” he said.

“In Mizoram, in the last 5 years, a number of developmental projects have been initiated which include 60 MW Tuirial hydro electric power project,” he said.

By 2021, Aizawl will be connected by broad gauge railways, he announced.

“The Kaladan multi-modal waterway and establishing of new border haats would bring huge opportunities of trade and commerce to Mizoram,” said Shah.

Drawing a comparison with the previous government, Shah said Mizoram received over Rs. 19,970 crore during 13th Finance Commission whereas during the 14th FC, over Rs. 42, 970 crore have been spent by the Modi government for Mizoram’s development.