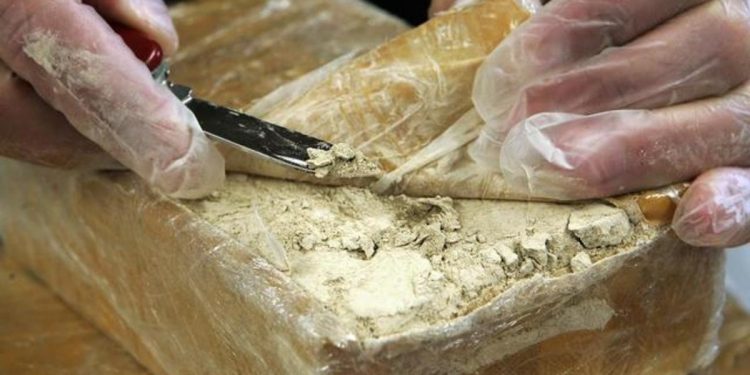 Mizoram Excise and Narcotics Department officials on Tuesday said that the department along with the Assam Rifles in a recent joint operation had seized 260 gm of heroin from a house in Zangtui area of Aizawl.

The contraband estimated to be around Rs 9.50 lakh was reportedly smuggled from Myanmar into Mizoram.

It was hidden inside a false ceiling in the house from where it was seized.

As per reports, officials have arrested one person in connection with the smuggling on Monday.

The accused person booked under relevant sections of the Narcotic Drugs and Psychotropic Substances Act, 1985 was produced before the special judge (ND and PS Act) who remanded him to a judicial custody for 14 days.

Last month, the Mizoram Police seized 447 grams of heroin from a woman and arrested her in the Lunglei district in the state.

The value of the seized heroin is estimated to be Rs 17.50 lakhs. The drug is suspected to have been smuggled from Myanmar.

The officials of the State Excise and Narcotics Department had seized around 6.035 kilograms of heroin, 13,400 Methamphetamine tablets and 1,59,471 tablets of pseudo-ephedrine during several raids conducted by the department from various parts of the State in 2017.

In 2017, Mizoram conducted the Baseline Survey on Extent and Pattern of Drug Use in the State, the first-of-its-kind complete survey, has revealed many shocking facts about drug abuse in the state.

The survey revealed that 81.6 per cent of drug users were jobless while 32 per cent drug users among males had permanent jobs. Among the female drug users, 12.9 per cent sold drugs and 33 per cent were commercial sex workers.

Pharmaceutical opioids are the most commonly abused drugs in Mizoram, followed by heroin, sedative drugs and inhalants or volatile solvents.