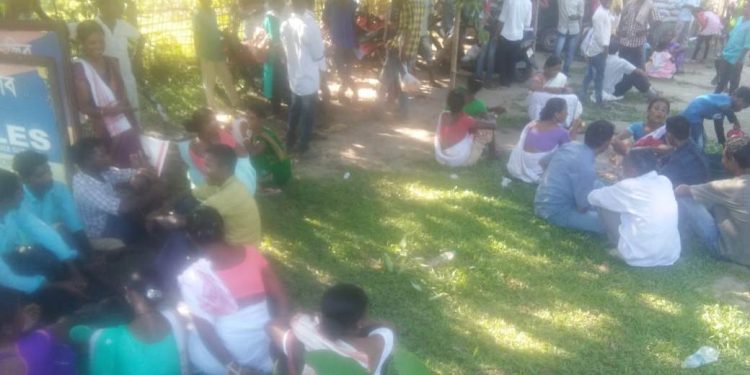 The body of a 21-year-old Adivasi girl, with a noose tied around her neck, was found at Barbaruah Tea Estate in upper Assam’s Dibrugarh on Saturday.

Family members and locals alleged that the girl was raped before she was murdered.

The victim used to work as a house maid in the staff quarters at the Brahmaputra Cracker and Polymer Limited (BCPL) Township here.

The incident sparked massive protest in the area and hundreds of enraged tea garden workers gheraoed the Barbaruah police station seeking stringent punishment against the culprits.

The Assam Tea Tribes Students’ Association (ATTSA) has threatened to launch a mass agitation if the culprits were not arrested in 24 hours.

“We have demanded that the culprits be immediately nabbed. The crime against tea tribes people has been rising. We demand to the police to arrest the culprits within 24 hours and if they failed to do so, we will launch a mass agitation,” said an ATTSA leader.

According to her family members, the girl came out of her residence situated at No 3 Line of Barbaruah Tea Estate around 6.30 am on Saturday to proceed for her work.

Like everyday she went through the No 5 line of the garden which was a short cut to her place of work.

Around 8.30 am some workers of the tea estate noticed the body with a noose tied around her neck lying among the tea bushes in No 5 line.

The family members have lodged an FIR at Barbaruah police station alleging rape and murder.

Monoj Baruah, officer in charge of Barbaruah police station, said, “We have sent the body for post-mortem and waiting for the report. No one has been arrested so far. Investigation is on.”

“The workers informed us about the incident after they saw the body of the girl. We rushed to the spot and found the body lying in the tea garden.

“We suspect it to be a murder but cannot say about rape. We have started investigation and very soon the culprits will be arrested,” he added.

The police acted swiftly and arrested all the accused persons.