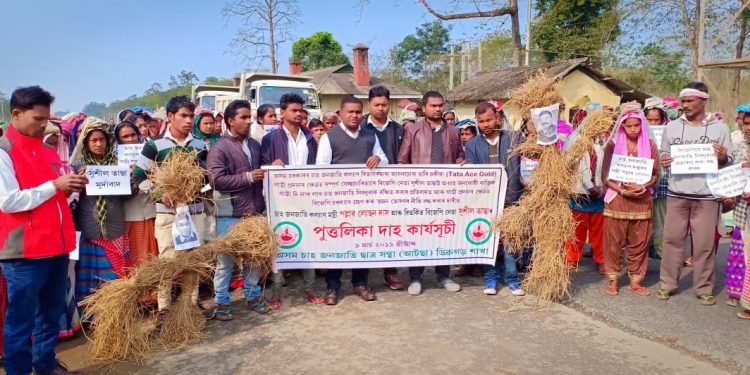 The Dibrugarh unit of the Assam Tea Tribes Students’ Association ( ATTSA) on Saturday staged a protest against anomalies in vehicles distribution in tea gardens in Dibrugarh district of upper Assam.

However, the BJP government has decided to distribute vehicles for the unemployed youth of tea gardens for earning their daily livelihood.

“On March 5, 2019, the BJP government distributed 22 Tata Ace Gold mini trucks to unemployed youths of tea garden in Dibrugarh district and only one vehicle is distributed in the Lahowal block. Those who were distributed vehicles were mostly associated with the BJP and relatives of BJP leaders,” alleged Lakhindra Kurmi, publicity secretary of ATTSA’s Dibrugarh unit.

In Lahowal, the person who got the vehicle is from Schedule Caste (SC) and a BJP worker.

Many educated unemployed youths of tea gardens were didn’t get the vehicles but those who are relatives of BJP leaders and associated with BJP party get the vehicles,” .

Kurmi alleged that Sushil Tasa without discussing with the selection committee distributed the vehicles to people of his choice and as he wished.

“We are sure that Sushil Tasa has done anomalies in the vehicle distribution because earlier he was involved in corruption during Congress government and now he is running corruption in the BJP government. We urged the chief minister Sarbananda Sonowal to take step against him,” alleged Sushil Patar, secretary of the Dibrugarh unit of ATTSA.

“We demand resignation of Sushil Tasa from the chairman’s post of district tea welfare board. Without discussing with the selection committee, how can he distribute vehicles on his own? The real beneficiaries of the tea garden should get the vehicles but the BJP government has distributed vehicles to the people who are close aide of the party. Earlier, we submitted a memorandum to chief minister Sarbananda Sonowal through Dibrugarh deputy commissioner Pallav Gopal Jha,” Patar said.

The students’ association alleged that the BJP government is doing politics in the name of vehicle distribution.

“The poor unemployed youth of tea garden should get the vehicles to earn their living but it seems that the government is distributing vehicles to their close associates. We have urged them to stop such politics in the name of vehicle distribution,” the students’ body alleged.