Despite ruling for quite 55 years, Congress has failed to fulfil the hopes and aspirations of the people of Assam: Sonowal 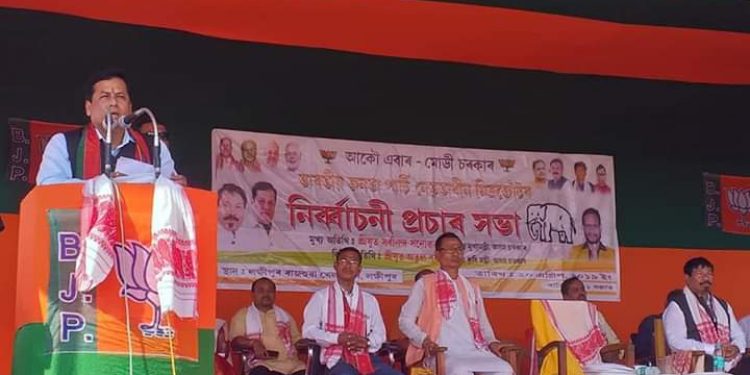 Assam chief minister Sarbananda Sonowal on Saturday said the the Indian National Congress (INC), which has ruled both at the Centre and state for quite 55 years, has failed to fulfil the hopes and aspirations of the people of Assam and betrayed the Assamese people.

“They (Congress) have betrayed us. They gave promises but didn’t fulfil,” chief minister Sonowal said while addressing an election campaign rally at Lakhipur in West Goalpara of Lower Assam on Saturday.

While lashing out at the Congress, Sonowal further sai, “It is because of the divisive policy of the Congress that majority and minority community has been created in the society.”

Sonowal further alleged, “It is because of the misappropriation of the development schemes by the Congress, the common people remained poor and Congress leaders became rich.”

Regarding the common allegation levelled by the Congress that ‘BJP is an anti-Muslim party’, the Assam CM said: “It is during the tenure of the Congress that many communal riots took place in which religious minority people lost lives. But under the BJP, every caste, community and religion is safe.”

Statting that there is affinity between the Congress and the AIUDF, Sonowal said, “Congress and AIUDF are the two sides of the same coin. Once they come to power, they divide the society in the name of language or ethnicity.”

Meanwhile, to the euphoric celebration of the public, Sonowal informed that twenty one new residential educational institution will be set up in the state including nine exclusively for women each costing thirty crore by state government and rest being the central sponsored fund.

On the other hand, Atul Borah, Assam agricultural minister and president of Axom Gana Parishad appealed the voters in the meeting to make win their common candidate Javed Islam who is from AGP and backed by BJP and BPF.

Dhubri is going on poll on April 23 in the third phase of the election. The two other prominent candidates in the fray are sitting MP and AIUDF supremo Badruddin Ajmal and Congress candidate Abu Taher Bepari.