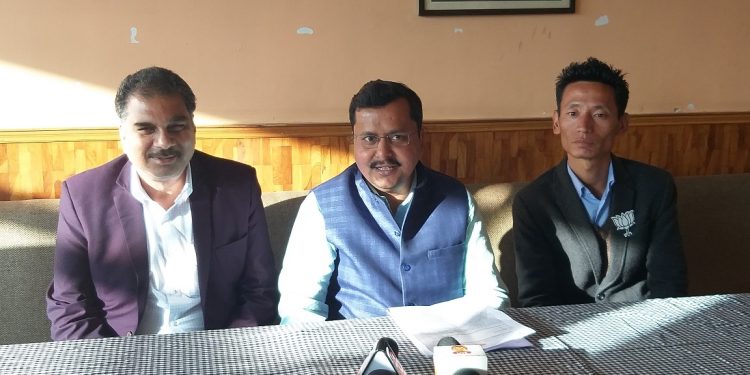 Bharatiya Janata Party (BJP) Sikkim election in-charge, Nitin Nabin on Tuesday stated that the seat reservation for Limboo and Tamang of Sikkim in the State Assembly will be the first gift to the people of Sikkim from BJP on forming the government at the Centre this time.

He expressed that BJP wants to work for the people of Sikkim by taking development to every corner of the State.

Addressing a press conference in Gangtok on Tuesday, Nabin stated that the BJP was committed and concerned for the total safeguard of the Article 371F but ‘some sections have been trying to mislead the people on this issue.

Speaking on the election campaign in the State, Nabin mentioned that BJP is contesting in 12 Assembly seats and one Lok Sabha seat in the State. He added that the party candidates have been going door-to-door with programme of BJP and have been getting encouraging support from the people. He expressed his hope that lotus will bloom in the State this time.

A delegation of BJP led by Nabin has also submitted a four-point memorandum to the Election Commission of India (ECI) on Tuesday. He mentioned that in the memorandum the party informed the ECI that the polling took place till late night at some places in Sikkim during last election.

He also said that in the memorandum, the BJP has expressed its concern that such practice of polling till late night raised concern for malpractice and bogus voting and appealed the ECI to finish the polling process in its scheduled time to ensure free and fair election.

The memorandum has also requested to make necessary arrangements to ensure the participation of aged and differently abled voters in polling process, strong police patrolling in the State soon after ending of the campaign scheduled to stop any practice to lure the people and deployment of paramilitary forces in the sensitive and very sensitive polling stations.