We want a comprehensive inquiry which will look in totality: Home Minister James Sangma 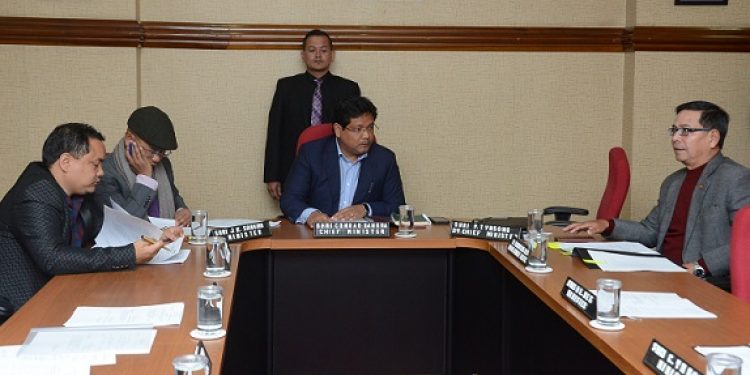 A view of the Meghalaya Cabinet meeting in Shillong. Image - Northeast Now

The Meghalaya Cabinet chaired by Chief Minister Conrad K Sangma has approved to have an independent inquiry into the brutal attack on social activist, Agnes Kharshiing and her aide, Amita Sangma.

After the State Cabinet meeting, Home Minister James P.K. Sangma told reporters that the terms of reference of the inquiry including the person who will head the inquiry and duration to complete the probe would be worked by the political department and law department.

Stating that the Government is concerned and serious about the incident, Sangma said that an independent facing finding inquiry will look into all aspects – mining and circumstances that led to the attack of the social activist and her aide.

“We want a comprehensive inquiry which will look in totality,” the Home Minister said while responding to a query whether the independent probe will go into the details of illegal mining and transportation of coal apart from the incident on November 8.

One of the victims, Amita Sangma had named one Nidamon Chullet as the main accused, who is still at large.

Chullet is also one of the leaders of the ruling National People’s Party (NPP) in East Jaiñtia Hills district.

On this, the home minister said that the party would take a call and before initiating any action, the party also has to prove beyond reasonable doubt the involvement of people.

“Police are taking action from their end based on investigation, and this independent inquiry will go way back to the genesis of the ban on coal mining since 2014 as well as the roots that led to the incident (on November 8). The probe will go into all aspects,” the Home Minister said.

Amita suffered serious injuries on the head and other parts of the body and one of her fingers was amputated. Amita is stable now.

Agnes too, had multiple head injuries and other parts of the body. Agnes is still critical but stable, and not in a position to speak.

Both the victims are being treated at the North Eastern Indira Gandhi Regional Institute of Health and Medical Sciences (NEIGRIHMS), Mawdiangdiang about 8 km from here.

Agnes has to also undergo surgery for fracture in the right hand arm and elbow.