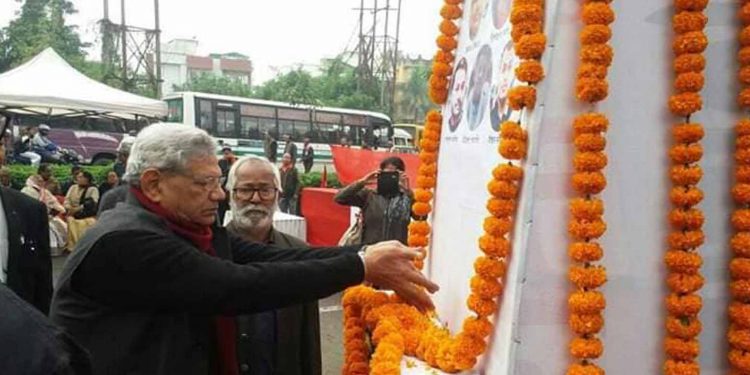 Yechury said this while addressing an anti-Citizenship (Amendment) Act (CAA) rally in Guwahati on Friday.

“At least 13 chief ministers of non-BJP ruled states have stated that they are against National Register of Citizens (NRC),” he said.

However, these chief ministers must oppose NPR like Kerala and must adopt a resolution stating that CAA will not be implemented in their states,” he added.

The veteran Left leader said that the BJP has been telling that CAA is a Central law and that the state cannot reject it.

“Let me tell them laws may be enacted by Centre however state government implements it. Implementation is the work of the states,” he added.

Stating that students across 100 colleges and Universities are opposing CAA, the CPI (M) leader said that the BJP has been trying to communal polarization for vote bank politics.

“BJP has come out with buy one get three packages. Their package is to buy CAA, you get NRC, NPR free and again NRC and NPR is a joint package,” he said.

“In Parliament, the BJP government had stated that they will bring NPR so that based on it nationwide NRC would be made,” he said.

In NPR they are asking six new questions. When is your parent born and where?” Yechury added.

“After NPR, the entire country will have doubtful voters like Assam. We supported the Assam Accord. Even BJP supported Assam NRC. That’s why we wanted Assam and northeast out of CAA,” he added.

Yechury said that no where it is written that citizenship is related to religion. “We are against this linking of citizenship to religion and we are going to oppose it,” he said.

“And why these three countries only- Bangladesh, Afghanistan and Pakistan? What about Tamil refugees? What about the Rohingyas? Why are you selective about refugees?” he said.

He said that violence took place following CAA, in Uttar Pradesh, Assam and Karnataka, all ruled by BJP.

“In Assam, five people were killed in Karnataka two and in Uttar Pradesh 21. The government is accusing us of inciting violence by taking to misinformation campaign,” he further said.

“However, Prime Minister Narendra Modi is misinforming the people on CAA. If people opposing the government, they are branded as speaking the language of Pakistan,” he added.