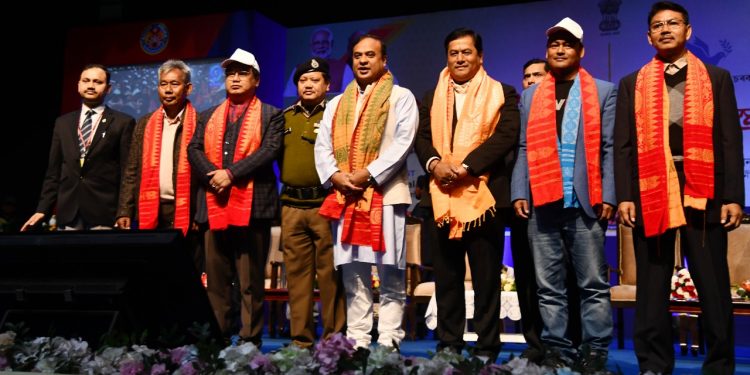 A total of 1615 cadres of the three factions of National Democratic Front of Bodoland (NDFB) militants laid down their arms and ammunition on Thursday as part of the arms laying down ceremony.

The cadres belonging to NDFB (Progressive), NDFB (Ranjan Daimary) and NDFB (Songbijit) also laid down 178 arms and over 4500 ammunition during the ceremony.

Also read: Every clause of new Bodo accord should be implemented, says NDFB (S) leaders

The cadres of NBFB-S, NDFB-P and NDFB-R factions laid down their arms following the signing of the historic Bodo Peace Accord with the Centre in New Delhi on Monday.

Terming the occasion as historic, Assam chief minister Sarbananda Sonowal said the Bodo Peace Accord which was signed by the Central and the State Government recently has been welcomed by one and all in the country.

The chief minister said the government under the leadership of Prime Minister Narendra Modi and home minister Amit Shah will implement schemes and policies that will encourage each and every cadre of the NDFB faction to living a dignified life in future.

Also read: Assam: Over 1500 NDFB cadres to lay down arms on Thursday

“I congratulate you all and welcome you for taking such a bold decision. If all the people of Assam works hand in hand, the state is bound to make a mark in the world,” he said.

A total of 178 arms and 4803 ammunition were laid down in the ceremony.