To trace the origin of the wounded psyche of a people at a far eastern corner of India, I am going back to the historical past before the idea of a political nation of India took shape. It was the British colonial intervention that led to a non-violent struggle for liberation and it became a common aspiration of all the people of the geographical subcontinent of India at that historic moment, but before that there was no notion of one India bound by a sense of political nationhood.

A major part of Assam was ruled by the Ahom kings since mediaeval time except a territory in the western part of geographical Assam ruled by the Koch kings. The Koch kingdom splintered much before the British occupation but the Ahom kingdom retained its integrity more or less till the Burmese invasion and subsequent annexation by the British that eventually led to its political integration with British India. 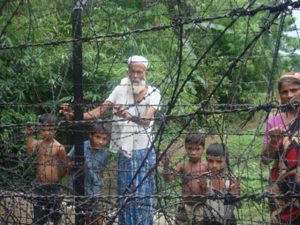 A common administration under the Ahom rules for six hundred years generated a sense of oneness among the Ahom subjects. Though Nationalism as a political creed cannot be said to have taken a conscious hold of the mind of the people inhabiting the territory ruled by the Ahom kings, it created a sense of unity during the years of fighting against the invading army of the Mughal Empire. At conscious level, it was a sense of patriotism, a collective feeling for the motherland Assam which had to be defended. In the submerged landscape of the mind, a sense of being a distinct people within a geographical region took root and continued to seed itself.

At the beginning of the British rule, these people’s language got replaced by Bengali in official communications and in education, only to be restored at the intervention of the Baptist missionaries and Anand Ram Dhekial Phukan. That was the first wound on the sensitive minds of these people and its sensitiveness never evaporated from their mind. Much later, that is in recent times, the proto-nationalism seeded by patriotism manifested itself as a rallying cry of that section of this people who saw both the pre- Independence British rule and the post-Independence Indian rule as two different forms of colonialism imposed on an Independent nation. Assamese jatiyotavad grew out of this feeling of being politically independent throughout History.

The unabated illegal migration of Bangladesh nationals has led to a rationalization that the illegal migrants are a much bigger danger as they have turned into vote banks and thus have earned political clout, by means of which they have been politically and demographically robbing the space from the autochthons.

In post-Independence India, this sense of political jatiyotavad no doubt drew its sustenance from an alienation affect arising from the contemporary socio-economic situation but searched out its historical locus in the seed-bed of the pre-modern political unconscious. In the eighties of the 20th century, it began as a political assertion of a linguistic community in the periphery of the Indian nation languishing at the edge of economic growth that also suffered from a sense of insecurity resulting from the continued influx of a homogenous migrant population from across the national border.

To begin with, it was not secessionist in nature; rather it was an agitation against continuous influx of Bangladesh nationals fast changing the demographic balance and was a kind of identity-assertion and a psychological defense mechanism. They sought a rightful place in the Indian polity and found themselves almost reduced to a non-player because of the region’s distance from the Centre, overpowered by a sense of neglect by the Central leaders.

The Indian Federation (called a Union reminding that the constituent units have no right to secede) in its formative years failed to note the asymmetry of the linguistically separated economic regions and the special need of the smaller nationalities failed to receive special attention. Heterogeneity was glossed over by the economic vision of the country as it was read only as diversity.

Thus the symmetrical approach of the Union might not have addressed the micro-level inequalities requiring special attention to the need of a people living their life in a geo-political unit away from the Centre—the people who are weak in economy and feeble in say. For instance, if distribution of fund is done on the basis of macro-criteria like population and size, it fails to take into account the low level of development of the economically weaker regions increasing the gap between the already-strong and the weaker regions.

Independent India, except in later plan periods, appears to have a symmetrical federal approach to governance that blurs the asymmetrical character of its different units incorporated in the Constitution. In this background, two nationalisms were in constant tension, one proposing to identify as Indian nationalism, the other frequently manifesting as linguistic-cultural nationalism, and in case of smaller nationalities as Ethnicism.

The suspicion against outsiders has always been strong in Assam, as much of economic space has been taken over by the outsiders. When the indigenous people of Assam faced a situation in which it found itself at a lower stage of economic progress compared to the other linguistic communities, further compounded by the pressure of migration, its proto-nationalism erupted as conscious emotive jatiyotavad. The jostling of the sons of the soil and the outsiders in a narrow socio-political as well as economic space caused anxiety, and as a result, the sons of the soil felt being throttled.

There are numerous ethnic communities and they have their own issues with each other. But the sense of being overwhelmed by outsiders is much stronger. The unabated illegal migration of Bangladesh nationals has led to a rationalization that the illegal migrants are a much bigger danger as they have turned into vote banks and thus have earned political clout, by means of which they have been politically and demographically robbing the space from the autochthons.

It found different expressions in the socio-political domain with a centrifugal tug against Indian nationalism. In the later part of the eighties of the last century, this centrifugal tug became so strong that it gave rise to several insurgencies. Fortunately, there is also a spiritual bond of the people here with the spirit of India through shared myths, Epics, devotional literatures, pilgrimage etc., and it played a centripetal tug against the secessionist tendencies.

Because of Delhi’s unwillingness to recognize the loss of political and economic space by Assam’s indigenous people due to continuous pressure of a land-hungry population of foreign origin— different sections of whom are pampered by different political parties for narrow vested interests— the psyche of these people are not only highly agitated but it is wounded.

There is a lack of political insight by the leading political parties of India into the minds of these people. There is a lack of understanding that continuous immigration from Bangladesh of a people of different linguistic-cultural make-up and the Indian State’s failure to address the problem beyond vote-bank politics have been causing serious strain on the political bonding of these people with Mother India.

Because of Delhi’s unwillingness to recognize the loss of political and economic space by Assam’s indigenous people due to continuous pressure of a land-hungry population of foreign origin— different sections of whom are pampered by different political parties for narrow vested interests— the psyche of these people are not only highly agitated but it is wounded.

It will be wrong to think that the sons and daughters of the soil can be persuaded by sweet talks to accommodate the adopted sons and daughters of some National political parties wanting to take their guardianship. The Government will do well to avoid stoking the insurgency fuel once again playing on the perceived gullibility of these people, who are simple but surely not gullible. Their simplicity may find volcanic expression if they are driven to the wall.