At a time when the government is celebrating Siukapha Day with pomp and gaiety, the dilapidated conditions of the historical maidams, the royal graveyard at Charaideo, speak volume of government’s apathy towards the maintenance of these historical structures.  Charaideo was the first capital of the Ahom kingdom established by the first Ahom king Chao Lung Siukapha in 1228.

Maidams are royal graves with dome-shaped structures. It is interesting to note that Charaideo was the first capital of Ahom Kingdom and later the capital was shifted to Gargaon. These maidams resemble pyramids but the interiors of these mounds worked as crypts for burying dead kings along with valuable items and food. 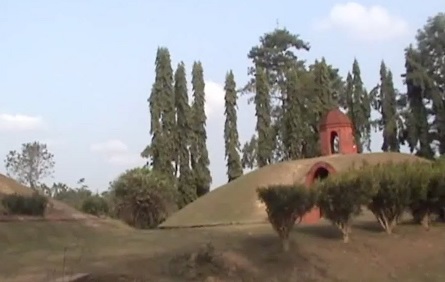 Ahom maidams in Charaideo district of Assam are always the centre of tourist attraction as these unfold the wonder of excellent architecture and skill of the sculptors and masons of Assam of the medieval days. However, lack of proper upkeep of these historical structures has raised a many eyebrows regarding the sincerity of the authorities in preserving these monuments.

The actual number of maidam has exceeded 150 but only 30 maidams are protected by the Archaeological Survey of India and Assam State Archaeology Department.  The rest of maidams remain unprotected. Most of these unprotected maidams are encroached by people. The biggest unprotected maidam is the Bali Maidam near Nimonagarh. This maidam is called Bali Maidam, because the British got obstruction from excess sands (Bali) in the surrounding of the maidam when they raided it.

It may be recalled that on April 23, 2015, the Archaeological Survey of India announced the existence of a number of female skulls along with a male skull in a maidam.

The ASI collected blood samples from descendants of Ahom kings to conduct DNA tests to find out whether the bones excavated belonged to the Ahom royal families.