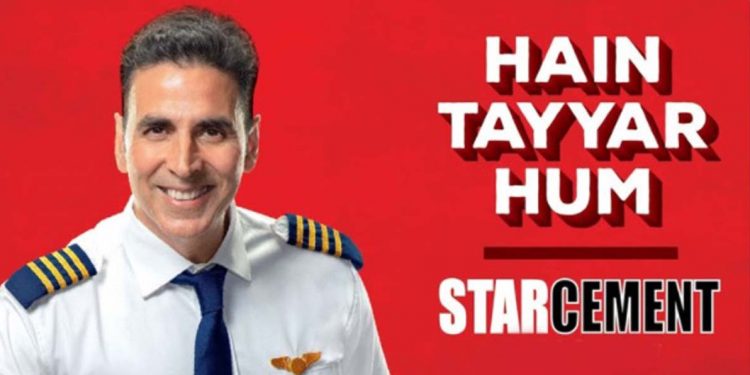 While ‘Hai Tayyar Hum (We are ready)’ is the tagline of Star Cement, the top management is ‘Tayyar Nahi (Not ready)’ to speak on the “controversy” over Environment Clearance for a major expansion plan in Meghalaya.

A public notice claimed that the Ministry of Environment, Forest and Climate Change on June 8 accorded Environment Clearance to Star Cement to mine limestone and shale at Brichyrnot village in East Jaintia hills district of Meghalaya.

The public notice stirred a major ‘controversy’ in Meghalaya because if the claim of Environment Clearance by Star Cement is true, it has been accorded by totally flouting the MoEF&CC rules.

Public hearing is a mandatory step for Environment Clearance for mining projects because it provides a legal space to local population to come face-to-face with the project proponent and the government to express their concerns.

The indigenous tribal population in East Jaintia hills district are up in arms to thwart the ‘expansion’ plan of Star Cement because it would mean a major ecological disaster in the area. 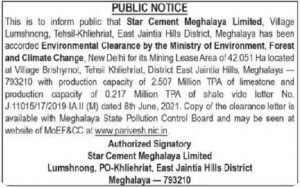 Several organizations, including the Narpuh Unit of Khasi Students Union (KSU) and Jaintia Students Union (JSU) opposed the public hearing, which was organized at the office of the Deputy Commissioner of East Jaintia Hills at Khliehriat.

The public hearing, which was held on November 22 last year, had to be cancelled following a violent protest. Seven police personnel, including a woman constable, were injured in the clash with the local tribal protesters.

Now, the public notice amid Covid19 pandemic, claiming that MoEF&CC accorded Environment Clearance to Star Cement, is set to snowball into a major controversy.

Top management of Star Cement is tight-lipped, and is not ready to speak anything on the Environment Clearance by the MoEF&CC.

“I don’t know anything on the subject. Please speak to our Production Managers at Lumshnong in East Jaintia hills district,” Pradeep Purohit, vice-president of Star Cement told Northeast Now.

Despite repeated attempts, Production Managers of Star Cement’s Factory at Lumshnong in East Jaintia hills district of Meghalaya were not available for comments.

Sanjay Kumar Gupta, the CEO of Star Cement, who is based in Kolkata, also did not receive calls.

Caught in the whirlpool of resistance, the Meghalaya government has apparently decided to stay away from the controversy.

Meghalaya chief minister Conrad Sangma has said that his government had sent a detailed report to the MoEF&CC on the ‘unsuccessful’ public hearing last year.

“The matter is now for the central government to decide,” Sangma said, adding that the Meghalaya government had briefed New Delhi about local peoples’ opposition to Star Cement’s expansion plan.

As the Meghalaya government has now adopted a non-aligned stance, it is going to be a Herculean task for Star Cement management to go ahead with the implementation of its expansion plan in the far-east of Meghalaya.

The pressure groups, including the Khasi Students Union (KSU) and Jaintia Students Union (JSU), have started consolidating support and public opinion, and are sure to launch major agitation soon against Star Cement.