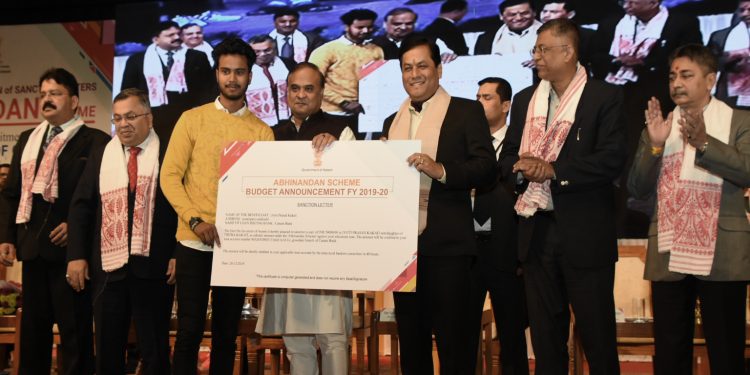 As a part of the scheme, the CM distributed subsidy sanction letters against education loans availed by them.

Under this scheme, the Chief Minister ceremonially distributed one-time subsidy sanction letters for an amount of Rs 50,000 each to 1546 students.

Speaking on the occasion, Sonowal urged students to pursue their academic activities seriously to shine in the present competitive world.

He said that education builds a strong foundation among students and helps them to successfully overcome all adversities in life.

He also called for united efforts to develop a positive and healthy environment in society.

Sonowal said that the newly launched ‘Abhinandan’ scheme would extend cooperation to students in pursuing higher education and to fulfil the dreams of their life.

He also urged them to take a resolve to put Assam in the list of front-ranking states of the country with hard work, knowledge and service to society.

CM Sonowal said that the State government took up a number of initiatives to maximize academic opportunities for students through scholarships, free admission into educational institutions, distribution of free textbooks etc.

He further said the state government aims to transform Guwahati as the expressway to the South-East Asian countries.

“To make this goal into a reality the youth of the State will have to prove their potential as skilled human resource,” the CM said.

Sonowal further said the Centre’s decision, under the leadership of Prime Minister Narendra Modi to augment production capacity of Numaligarh Refinery Limited from 3 MMT to 9 MMT opened new opportunities for the youth in the State.

Sonowal urged the youth to avail the benefits through improving their skills.

He also urged parents and teachers to inspire and motivate the students to indulge in academic activities with seriousness and sincerity.

Finance minister Himanta Biswa Sarma said that students who did not apply under this scheme so far could avail the benefit of government subsidy by applying now also.