BJP leader and one of the prime accused in the sub-inspector (SI) recruitment scam, Diban Deka has finally surrendered before Assam Police.

According to sources, he surrendered before Patacharkuchi police in the newly-formed Bajali district.

Assam Police declared a reward of Rs 1 lakh to anyone who can provide information on Diban Deka.

Diban Deka was allegedly involved in the leakage of question paper for the written test of sub-inspectors in Assam Police.

According to police, Diban Deka’s involvement in the scam surfaced after a question paper was recovered in Thank You Lodge at Ganeshguri in Guwahati during a raid carried out by the Crime Branch of Assam Police.

According to sources, a team of police led by the additional director general of police (law and order), Assam, GP Singh, is taking Diban Deka to Guwahati.

The kingpin of the scam, former DIG, PK Dutta is still absconding.

Amid probe into the anomalies in the process of the recruitment of sub-inspectors in Assam Police, the chairman of State Level Police Recruitment Board (SLPRB), Assam, Pradeep Kumar recently resigned from his position.

BJP leader Diban Deka has hinted involvement of many “dishonest” police officers in the scam.

BJP leader Diban Deka in a Facebook post on September 24 wrote: “The circle of Assam police has been torn in the question paper, many big people are involved. Many dishonest officers of Assam police are involved in this circle. There is also an officer, involved who has secretly killed many people.” 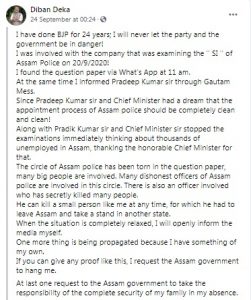 However, state DGP Bhaskar Jyoti Mahanta has denied the involvement of Assam Police in the scam.

Assam chief minister Sarbananda Sonowal on Wednesday said nobody would be spared if found responsible for the Assam Police sub-inspectors’ recruitment scam.

Sonowal said the state government has instituted an inquiry into the sub-inspector (unarmed branch) recruitment scam and the investing agency has been asked to conduct the inquiry impartially without any compromise.