President Ram Nath Kovind on Wednesday was trolled after he had extended Bohag Bihu greetings through the social media site Twitter. 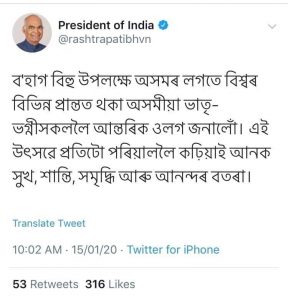 A statement that had been earlier posted on the official Twitter account of Rashtrapati Bhawan that read ‘On the occasion of Bohag Bihu, I extend my good wishes to the Assamese brothers and sisters in various corners of the world. May this festival bring happiness, peace , happiness, prosperity and joy for every family.’

However, Twitterati was quick to point out the mistake and asked Kovind to immediately make corrections in his post.

The new tweet states, ”On the occasion of Bhogali Bihu, I extend my good wishes to the brothers and sisters of Assam along with the Assamese people who resides in various corners of the world. May the light of Meji destroy all kinds of evilness. May this festival bring happiness, peace , happiness, prosperity and joy for every family.

Meanwhile, Prime Minister Narendra Modi also extended his wishes to the Assamese people on the occasion of Magh Bihu.

In his greeting written in English and Assamese, he said, “Magh Bihu signifies hope and prosperity on this festival. My greetings to everyone especially my sisters and brothers in Assam. May this special occasion further the spirit of joy in society.”