Praise the master is the new mantra for Northeast leaders

Serving people is no more the duty of politicians. ‘Praise the Master’ is the new mantra for most of the powerful leaders from northeast.

The Constitution of India enshrines that ministers or political leaders are bound to serve the countrymen in all capacities. 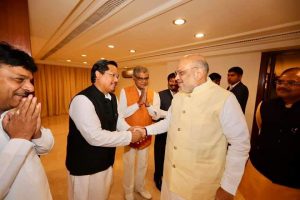 But in recent times it has transformed into serving and greasing the big bosses as seen in the case of several top notch political leaders from the Northeast who leaving all duties towards their states have reached Varanasi to be in the good books of Narendra Modi and Amit Shah on Friday.

Forgetting the woes of the people of Assam, Meghalaya and Nagaland, the leaders have all assembled in Varanasi. It’s more than a pilgrimage – portraying loyalty to Prime Minister Narendra Modi. Meghalaya chief minister Conrad Sangma, Nagaland chief minister Neiphiu Rio, and the Asom Gana Parishad (AGP) president Atul Bora along with Himanta Biswa Sarma are in Varanasi for the nomination filing of Narendra Modi.

It was just a few months before that the entire Northeast erupted in violent protests against the Citizenship (Amendment) Bill, 2016.

Leaders from various ‘so-called’ regional political parties and other indigenous organizations led a mass agitation against the contentious bill.

Conrad was dubbed as the ‘hero’ of the Northeast because of his continued opposition to the Citizenship (Amendment) Bill, 2016. 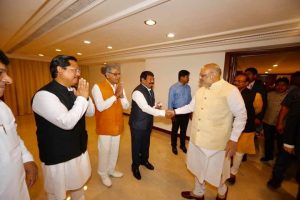 Even the Asom Gana Parishad (AGP) ministers, its presdent Atul Bora, Phani Bhusan Choudhury and Kesab Mahanta enacted a perfect emotional drama by resigning from the coalition government over the Citizenship (Amendment) Bill, 2016 only to join back the ministry and tie-up for the Lok Sabha election.

But the Bharatiya Janata Party (BJP) of which all these are allies proclaimed in its election manifesto that that its top priority is to bring back the Citizenship (Amendment) Bill, 2016 if it comes back to power.

The double standards of these regional leaders who claim to be the custodians of the indigenous people are blatantly exposed as they have all the time to be in Vanarasi for the the nomination filing of Prime Minister Narendra Modi.

The presence of Assam finance minister Himanta Biswa Sarma is understood as he no other option but to butter Modi, BJP national president Amit Shah and others of the saffron brigade to save his political career, but what raised quite a few eyebrows was the presence of Meghalaya chief minister Conrad Sangma, AGP president Atul Bora and Nagaland chief minister Neiphiu Rio, among others.

One is forced to wonder what two chief ministers has to gain from such a visit on state’s exchequer or do they don’t have absolutely anything to do in their respective states that they have gone to just the nomination filing of Narendra Modi?