On page number 11 of the 18-page letter written to CBI, Sen writes, “Another high-level person has dramatically cheated me. He is Mr Hemanta  (Himanta) Biswa Sarma. For the last six months, apart one and half years, he has taken from us not less than less Rs 3 crore all by cash and some vouchers have been signed by his office executives by some other means.”

Now-defunct Saradha Group chief Sudipto Sen on April 6, 2013 had sent an 18-page letter to the CBI alleging that several top politicians and officials blackmailed him for two years.

In the letter Sen listed 22 persons including minister Sarma who “used him” to make money. 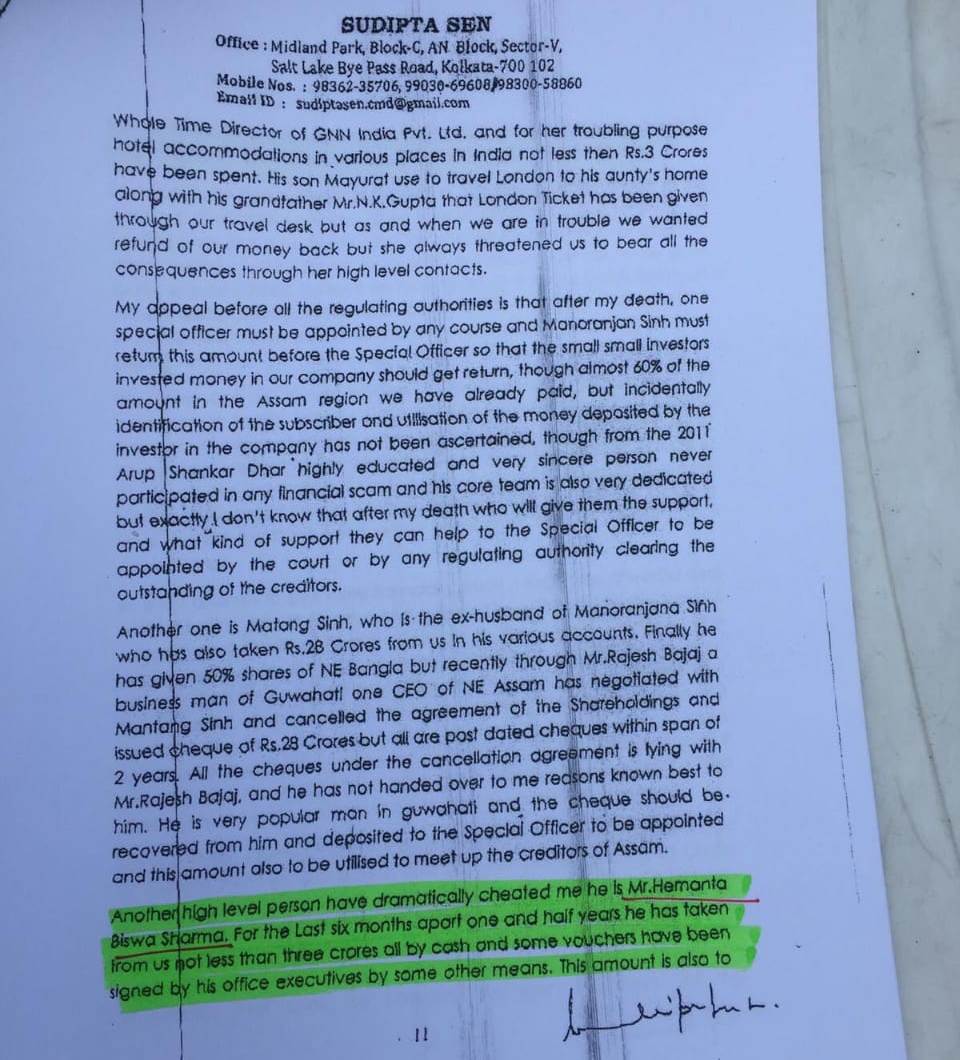 Minister Sarma, who switched to BJP from Congress, was health and education minister of Tarun Gogoi led Assam government during that time.

Citing Sen’s letter to the CBI, Mamata said, “CBI is acting on the instructions of Modi babu (Prime Minister Narendra Modi). The agency is selectively targeting opposition leaders. Those who joined the BJP are safe and those who are raising their voice are facing the wrath. This cannot be tolerated in India. There is an urgent need to save institutions. Why is the CBI not taking action against those BJP leaders who took money from the chit fund companies?”

The particular page of the letter is also being widely circulated on WhatsApp as well.

Attempts to reach Sarma went in vain as he did not respond to phone calls from Northeast Now.

CM Mamata on Sunday had claimed she had “enough evidence against the Assam deputy chief minister (read Himanta) ” and dared Prime Minister Narendra Modi and BJP president Amit Shah to get him arrested.

Earlier in the day, minister Sarma in a tweet said that he was “only a witness” in the case and the CBI had already examined him. 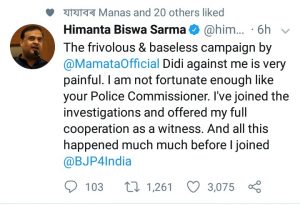 “It’s painful that Mamata Banerjee, whom I respect so much, is accusing me without considering the facts. The CBI had called me as a witness. I joined the investigation much before I joined the BJP. In fact, I had stayed with the Congress for at least three months after I was called for questioning. Even the CBI told the court that I was just a witness. So Mamata didi trying to drag me and my party into the Saradha’s scam is very painful,” Sarma further told reporters here.

Sarma was questioned by CBI in 2014. He was accused of allegedly receiving Rs 20 lakh per month from Saradha’s chairman Sudipto Sen to help him run his business in Assam.