People will give befitting reply to BJP in polls: AASU 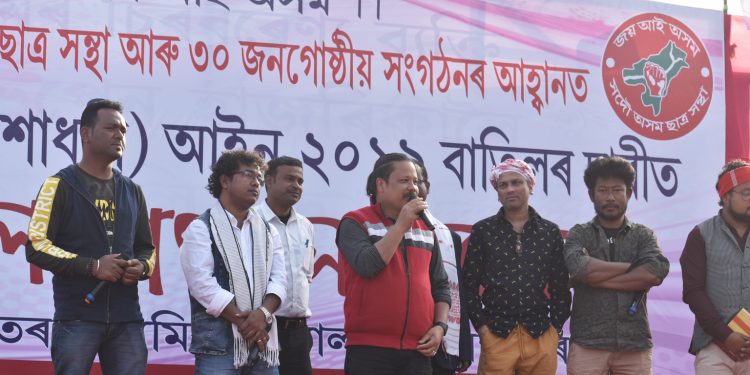 “The BJP government in Assam must get ready to face the music in the forthcoming Assembly polls in 2021,” said AASU president Dipanka Nath on Thursday.

He was addressing a gathering assembled at Tangla HS playground during an anti-CAA protest demonstration called by the All Assam Students’ Union (AASU) and 30 allied organisations.

“Everyone is united to fight against the saffron party and oust them from power to save the cause of the indigenous sons of the soil,” Nath added.

Over 10,000 people from all walks of life, draped in ethnic outfits and donning gamosas as headgears gathered and raised slogans against the Citizenship (Amendment) Act (CAA) and government.

“The Sixth Schedule areas and states of the northeast with Inner Line Permits (ILP) have been exempted from
the purview of CAA. This is sheer hypocrisy,” Nath added.

“The worst part of CAA is that the foreigners will be granted Indian citizenship and that too without having to produce any valid documents stating as to when they entered Assam,” he added.

“Any person with the surname ‘Ali’ if changes it to Saha or Basak, he will get citizenship which will have a catastrophic impact on the geographical landscape of Assam,” the AASU president added.

He further appealed the people not to be swayed by peace rallies organised by the BJP in support of CAA.

He also urged the students of the state to pursue their education as this protest is going to drag “long”.

“No dominance by the government on protesters in any form and manner will be tolerated,” he added.

Speaking in the occasion, Zubeen Garg mocked the government’s decision to provide a one-time grant of Rs 50,000 to artistes and technicians.

“Individually, I extend monetary help to needy, amounting to more than the proposed figure every day at my Kharguli residence in Guwahati,” Garg said.

He further remarked the politics of enticement by the government will not deter the people as baits are meant for fishes, not humans.

Referring to the decision to grant citizenship to foreigners he remarked, “Export and import are meant for goods and animals, not humans.”

“I will not say much as my words have been misinterpreted many times, stirring controversies,” Zubeen concluded.

Singer Bipin Chowdhung said, “The artiste fraternity stands with the Assamese society and we will continue to fight against CAA.”

“We will continue our agitation until and unless the government withdraws the Citizenship (Amendment) Act from Assam,” he reiterated.

“Burning tyres can be doused, but the igniting fire that has erupted in the minds of every Assamese will continue to burn,” Chawdang added.

In his address, AASU general secretary Lurinjyoti Gogoi said, “We will never accept this unconstitutional Act which is detrimental to the cause of the indigenous people of Assam.”

“CAA will give constitutional safeguards to the foreigners by identifying them in the lines of religion,” he added.

“The government is putting every possible effort to douse the protest. They have called back the VCs of the universities to check the students’ protest,” he added.

Gogoi also called on people to unlike and unfollow the social media pages of BJP politicians and leaders as a mark of protest against CAA.