BJP leaders are not guardians of Assamese people: AASU 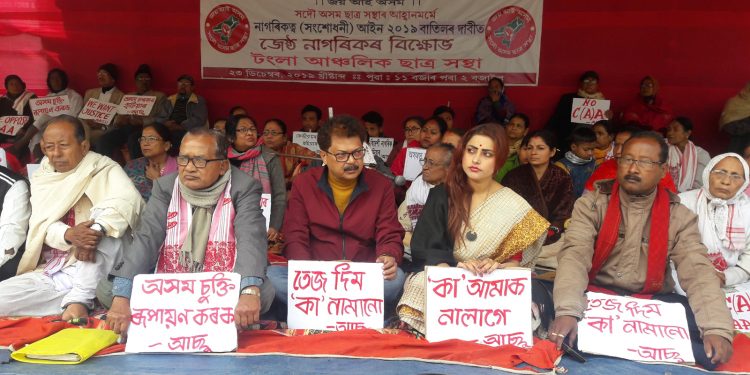 A central leader of the All Assam Students’ Union (AASU) on Monday said “the BJP leaders of Assam are not guardians of Assamese people to forcefully impose” the Citizenship Amendment Act (CAA).

While joining an anti-CAA sit-in protest at Tangla in Udalguri district, AASU’s assistant general secretary Jayanta Kumar Bhattacharya said, “The BJP leaders of Assam are not the guardians of Assamese people to forcefully impose an Act which is detrimental to the cause of the indigenous people.”

The protest demonstration, organized by the Tangla unit of the AASU, was participated by senior citizens, academicians, artistes and student leaders in large numbers.

Holding placards, the protesters shouted slogans like ‘We don’t want CAA’, ‘We will give blood but will not accept CAA’, ‘Inquilab Zindabad’, ‘Jai Aai Axom’ (Glory to Mother Assam).

They also raised slogans against the government and demanded to scrap the new Act.

A sexagenarian, Prafulla Baruah, also recited a self-composed poem as a mark of protest against the new law.

Noted Assamese short story writer Jayanta Kumar Chakravorty joining the protest said, “Assam has already borne the burden of illegal immigrants by extending the year 1951 to 1971 and the people will never accept a law which is detrimental to the Assam Accord.”

He further said, “The unconstitutional and non-secular law is for the establishment of the Hinduvta agenda of the RSS and BJP, and to preserve their vote bank politics.”

Chakravorty also lamented the fact that the student leaders-turned-politicians have “betrayed” the people by supporting the law, which is a “threat to the culture and language of Assam”.

He also said, “The Assamese are easy-going, peace-loving and merry-making people, who have been pushed to unrest by the government.”

A senior citizen, Dipak Talukdar, said, “We will try our best to protect the rights of the people and pass on a healthy society to the next generation by fighting against the new law till our last breath.”

Binoy Kumar Medhi, a senior citizen, who joined the protest, said, “We will never accept an Act that diminishes the native Assamese into second-class citizens.”

He said, “The government should have respected the sentiments of the people. How can there be a law that is detrimental to secularism, which is one of the core principles of the Constitution?”

Medhi lamented that regionalism has been compromised in Assam. “The AGP, which should have led the anti-CAA protest, was clinging to power and, hence, acting at the behest of the BJP.”

Tangla AASU president Pranjal Deka said, “Assamese is already a state language of Assam but the state government by reiterating the already prevalent Act is making a mockery.”

He further said, “We have committed a grave sin by bringing the saffron party to power and as a part of salvation, people must oust the government during the forthcoming Assam Assembly polls in 2021.”