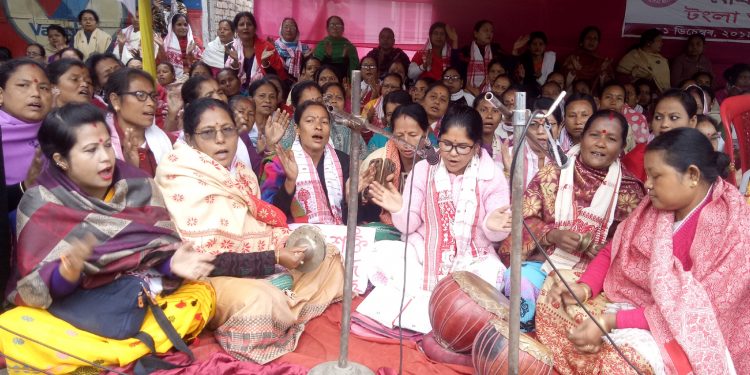 Over 2000 women from all walks of life including senior citizens along with AASU members and supporters staged a sit-in demonstration against CAA in Tangla in Udalguri on Saturday.

Slogans like “We don’t want CAA”, “This land is ours”, “Chase the infiltrators out” etc were some of the slogans raised against CAA.

Taking part in the protest, a 17-year-old student Nazrul Islam also recited a self-composed protest poem on the occasion.

“The Citizenship (Amendment) Act is a threat to the indigenous identity of Assamese and a ploy to divide people. If CAA is implemented, then we will become a minority in our own land,” said one Madhusmita Mazumdar.

Another protester Sabnam Rahman said, “Through CAA the government has attacked the soul of the people of Assam. We will never accept this.”

A sexagenarian protester Nivedita Deka said, “The protest against CAA is not only restricted to Assam alone as now the entire nation is against it”

“We are hopeful that the Supreme Court will do justice to the hopes and aspirations of the people of Assam and keep the state out of CAA’s purview,” she added.

Taking part in the protest, president of Tangla unit of AASU Pranjal Deka said, “The BJP and its allies- the AGP and BPF- will never be forgiven by the Assamese people for supporting CAA.”

“They betrayed us as CAA violates the clauses of Assam Accord,” he added.

“CAA may have passed by the Parliament, but the people of Assam will never recognise it,” he reiterated.