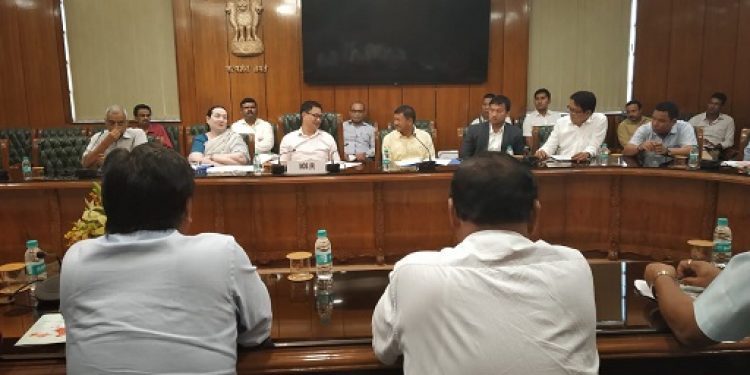 The meeting between a joint delegation from KAAC, NCHAC and Union Minister Kiren Rijiju in New Delhi on Thursday. Image - Northeast Now

During the meeting, held in the conference hall of North Block, New Delhi, the delegations appraised Union Minister Rijiju over the problems faced by the two Autonomous Councils in their functioning.

The delegation submitted a memorandum to Prime Minister Narendra Modi through the MoS for Home.

The memorandum pointed at the role of the Governor in the functioning of the two Autonomous Councils in which the Governor takes decisions after consulting with both the Councils and the State, which result in delay of implementation of works and projects.

“In reality dual authority in the development departments has been created and the Councils could not function without tolerating the overbearing interference of the state authorities who use the ‘power to approve’ and the ‘power to release fund’ as tools to arm-twist which led to the breakdown of the system that triggered the demand for the creation of Autonomous State under Article 244(A) of the Constitution of India with earnestness,” said the memorandum.

On the delay in implementation of the decisions taken by the Councils, the memorandum said, “The constant testing of the will of the hill people as expressed through the Council EC, delaying approval of the Governor as mundane a matter as appointment of the Executive Member or summoning of the Council session without rhyme or reason, is undemocratic and smacks of needless political authoritarianism which have been in the past demanded to be done away with.”

Rijiju assured of looking into the matter at the earliest.

“On behalf of Prime Minister, MoS, Home Affairs, Kiran Rijiju has invited us for an official meeting to discuss the issue of Autonomous State under Article 244 (A) of the Constitution. The meeting lasted for more than an hour and we got sufficient time to discuss the issue with Rijiju. The full implementation of Memorandum of Settlement (MoS) and Memorandum of Understanding (MoU) were also brought into the discussion by the delegation from three hill districts,” he added.

Ronghang further said, “We are demanding a ‘State within State’ within the Constitution. We also demand that the Central Government should call us once in every three months to New Delhi on the matter of Autonomous State.”

He informed the media that the next meeting will be convened by the Central Government after three months.